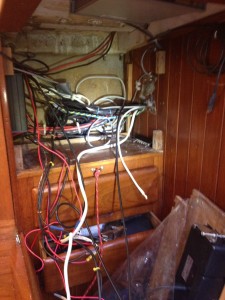 All boat owners know them, but the last week has been a particularly bad one for this old man. A week when a small list of fix-up jobs turns into a marathon; when everything you touch either breaks or discloses a new and unexpected problem; when nothing works and you wonder why you bother.

Every torch I pick up has flat batteries, my fastidiously serviced bathroom taps still leak, my jacket zipper jams. They’re the important things. Little problems like the dead radar, re-routing the chart plotter GPS cable, hauling new inverter batteries on board and installing them, and installing the new AIS transponder were merely added headaches. Still, everything has been done and all is now working. The radar problem was not a lightning strike but one tiny failed capacitor.

Finally, with provisioning complete, I can enjoy just sitting. A fat, strong coffee, a still and gentle Saturday with the ancient walls of Zea port golden in the morning sun. Kayakers glide up and down the harbour and all is good. We’re waiting for the diesel truck to arrive, then we’re off to Corinth Canal.

For tech buffs I must mention our new Vesper XB8000 AIS transponder. It is a little beauty! AIS signals are relayed faultlessly by wifi to all our electronic toys, even the iPhone, and we are now telling the world who we are and where we’re going. With radar backup this is a good safety device in crowded waterways. Setup is simple and the device is worth every penny, in my view. Chris is now in New York. I miss her, but how she would have hated this past week. At least we had a lovely day wandering aimlessly in Athens before she left. Pasha and Tania have arrived and settled in seamlessly. Pasha has been a great asset sorting our electronic stuff. Now they’re eating one of their astonishingly robust  breakfasts – peppers, salami, olives, fetta and capers. Coffee’ll do me.

Problem weeks are just part of cruising, I know, but they seem to become more exasperating as you get older. Then suddenly, everything is working, so you fall in love with the boat and the life once more.