In Tainui, Corinth is famous for 3 things – Mycenae, Acrocorinth Castle and a fouled propellor. Dealing with them in order of significance, Let me talk first about the propeller. 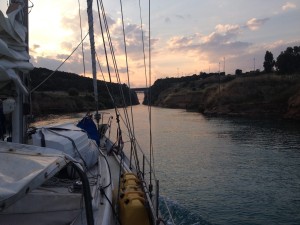 The trip through Corinth Canal – much lauded by Mediterranean cruising yachts, is expensive (EUR 230) but convenient (saving a 140 mile journey south around the Peloppenese). After Sweden’s Gota Canal, the Caledonian Canal and the Volga-Don Canal however, Corinth Canal came as a bit of an anticlimax for us. Julius Caesar and Caligula both thought about cutting this canal but died without starting the job. Nero actually began digging (well, 6,000 Jewish prisoners of war did it for him) but gave up. The French construction company which carved the Panama Canal finally completed it for Greece at the end of the 19th century, but it is now too shallow and narrow for most commercial vessels and is just a tourist earner. 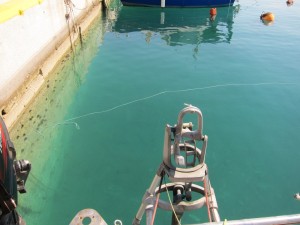 Once through the canal, we arrived in tiny Corinth marina after dark. Tainui’s skipper cleverly fouled a floating line, which fused onto Tainui’s propeller shaft. His chilly dip in the dark was a waste of time and the next morning it took Pasha an hour (and me 20 minutes) to clear it. But the water was clear and clean, and all went well. 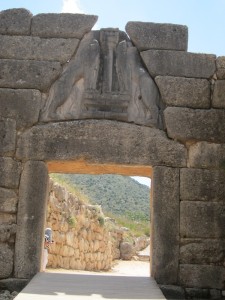 Dimitra, our cheerful taxi driver, drove us to Mycenae. An extraordinary site it is, even if Agamemnon’s golden mask actually belongs to someone else. Through groves of olive trees, orange orchards and eucalyptus forests the road took us to Mikines village (“Agamemnon’s Hostel – cheap rooms”, “La Belle Helene hotel” etc), ending at the base of a craggy volcanic mount with the 3,5000 year old ruins of a grand city atop. Needs renovation, but after all that time what can you expect? 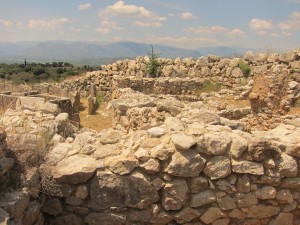 Few tourists. The wildflowers, birdsong, sweeping vistas provided a superb setting for this place. We walked in silence among the ruins of a city which flourished a thousand years before Ephesus. Not much you can say, really. 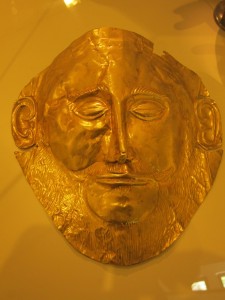 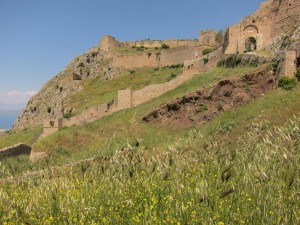 Acrocorinth Castle, towering above the city, is postmodern in comparison with Mycenae. Started by the Greeks, the citadel was extended and occupied in succession by Romans, Byzantines, Crusaders and Ottomans. It is a hot but exhilarating climb to the top of the site. Pasha and Tatiana romped up and I groaned and creaked my way up behind them. Wonderful views and zillions of wildflowers, especially those vulgar, claret-coloured annuals which so delighted Chris. Huge ramparts sit on the sheer cliffs. If I were in charge of an attacking force, I reckon I would just walk around it and move to the next bit. Breathtaking vista of the gulf of Corinth from the top. 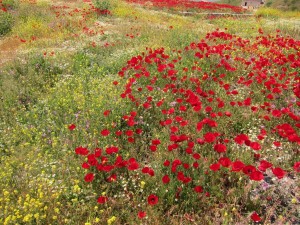 One thought on “Corinth”