Moving on  from Tainui after 20 years was a serious business – strange and more than a little unpleasant. I have such rich memories.  As Fitzgerald said, “So we beat on, boats against the current, borne back ceaselessly into the past”. Since then, maritime outreach in PNG and refugee rescue off the Libyan coast taught me that there are other vessels, other ways of practising medicine and other adventures – a difficult lesson, but it seems to have been learned.

Yes, Tainui has been sold, but the story continues. In early 2017 I took delivery of Blue Dove, a pretty little Rival 34, whose custodianship I later signed over to Maxine. She (the boat, that is) is 40 years old and no racing greyhound, but (like Maxine) she’s seaworthy.

After a summer cruise in Scotland and Wales we put Blue Dove to bed for the winter in Falmouth. In chilly March Maxine took the boat to Holland where I joined her in June for a summer cruise from Amsterdam back into northern Russia. Blue Dove spent the winter in Russia, ashore at Priozersk on the north-western shore of Lake Ladoga. In spring she cleared out of Russia and Maxine then took her back to UK and, ultimately, down to Gibraltar.

With pride  and some trepidation, Maxine and I have published an account of our 2013 Volga River journey from the Arctic to the Black Sea. 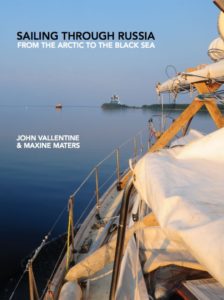 “…a captivating adventure…beautifully presented and bound, with noble images. Half pilot book, half cruising yarn. Vallentine is a semi-retired doctor from Australia with a dry, Aussie humour which he really needs as one crazy nonsense after another gets in his way. He is an unsung hero of ocean sailing.” [Tom Cunliffe, Great Seamanship –Yachting World August 2018]

“What a fascinating book! Even if you never repeat the history-making voyage of the Australian yacht Tainui, this is a great read. If you do plan such a venture, it is compulsory reading.” [ Peter Campbell, Afloat magazine]

“…this fascinating and entertaining book would be the ideal guide. Everyone interested in cruising off the beaten path…as well as anyone with a specific interest in Russia, will enjoy this book.” [Ocean Cruising Club book review]