My old friend and longest-serving crewman David Lucas drowned on 12 March in the sea he loved so much. It was a vicious rip at Brunswick Heads. Such a sad loss to the world.

Dave ran up 250,000 sea miles in the last 40 years. His friends included such luminaries as Bernard Moitessier, the Smeetons and the Hiscocks, to name but a few. But he shunned the limelight, the ocean racing scene and what he called “those new-fangled radios and electronic gadgets which boats have these days”. Quiet and absolutely without pretension, he had great difficulty making enemies. When not at the pub Dave was equally happy socializing or away from the crowds, exploring unknown Pacific anchorages.

His experience was eclectic, to say the least. He starting as a logman working the timber tugs in northern BC and then, in his beloved Herreshoff “Liberty 3”, he sailed back and forth between Vancouver and NZ for over a decade. I met him in Lautoka when “Liberty 3” took part in our inaugural Malolo LaiLai-Vila anti-yacht race.

After a couple of years with Rainbow yacht charters in the Bay of Islands David and Ian Allan bought Koala, an elegant 46′ timber tug, which became a familiar sight on Sydney waters. Koala carved a niche for herself in the film industry and Dave was boat wrangler on a number of watery films including Dead Calm, Goodbye Paradise (“The Rack and Jack Show”) and Return to Blue Lagoon. In Goodbye Paradise, Dave spent a whole day lying in the bottom of a dinghy clutching Raquel Welch’s ankles for a difficult scene filmed in the shallows at Wattamola Beach!

Dave only acted once in a film himself. Scrounging for pennies in Hawaii he drifted onto a film set and agreed to be an extra, driving a Rolls Royce for a day. “The easiest money I ever made”, he told me. It was not until 10 years later that someone told him they had seen him dressed as a chauffeur in a pornographic movie. He had had no idea!

As skipper and mentor for the Ocean Youth Club Dave then took the steel cutter “Destiny” on perhaps a dozen trips out to Lord Howe Island from Sydney. Setting out on one of those trips with a boatload of children, Destiny’s engine gave up near Sow and Pigs. Undeterred, Dave threw an inflatable into the water and pushed the yacht out the heads and into the breeze. When I later asked him about this engineless trip to LHI and back his laconic answer was “quite uneventful”.

In 1999 Dave found himself skippering a lovely old 70′ kauri motor vessel in the Pacific Islands for Circus Pacific. His cargo was a travelling circus troupe which had been cobbled together by a French Polynesian illusionist. All in a day’s work for him.

He then returned to Australia, first to drive water taxis and then to work on the Yamba-Lord Howe Island barge run for a couple of years, before retiring to Bangalow.

David was remarkable for his freedom of spirit and his complete disregard for material possessions. He was the kindest person I have ever met. His generosity of spirit and his willingness to lend a hand to sailors in need, anywhere and at any time, were quite inspiring. In “Koala” he once towed a disabled trawler into port and it would never have occurred to him to negotiate a salvage contract.

At his best when the weather was worst, he was a gentle soul and a fine seaman. I was privileged to have Dave sail with me for over 20,000 miles in Tainui – from Sydney to Macquarie Island, across the Southern Ocean to Patagonia, from Buenos Aires to Trinidad and from Nova Scotia to Labrador. All of those trips would have been so much more difficult without his unflappable presence and his superb seamanship. The worse the weather, the tougher he seemed to get.

David marched to his own tune and his idea of punctuality was at best idiosyncratic. How often we sat patiently waiting, while he rolled yet another cigarette, before we could cast off, tie in a reef or set off to explore a new town. If he didn’t like your suggested course of action he would just ignore it ( and so often he was right!). Dave loved and served Tainui unreservedly. In the end nothing else really mattered.

David Lucas is survived by his loving wife Jeanette and his dear friend Harriet (an elderly rescue dog). This good friend and colourful character will be sadly missed 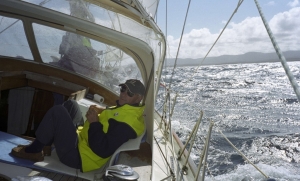