Here’s an article about our Mediterranean refugee rescue activities, published in The Wall Street Journal recently. I believe its author misrepresents the position somewhat. My letter to the editor in response follows. This was not published by the journal.

And finally, a couple of splendid reader comments which appeared in a subsequent issue of the magazine. There’s not much more to say, really! 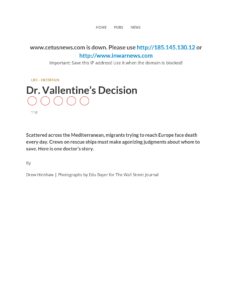 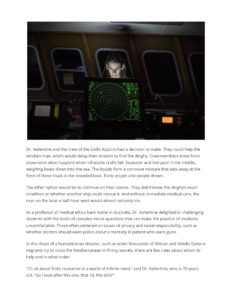 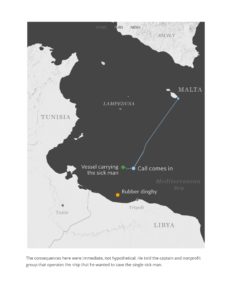 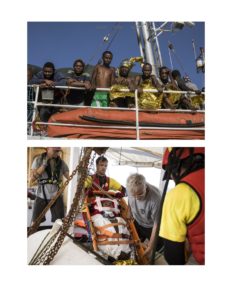 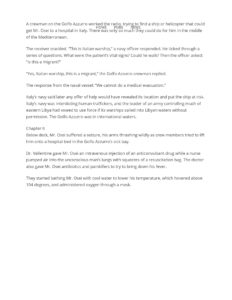 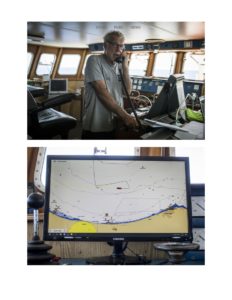 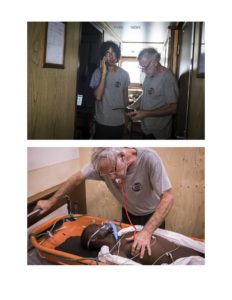 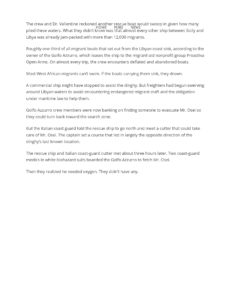 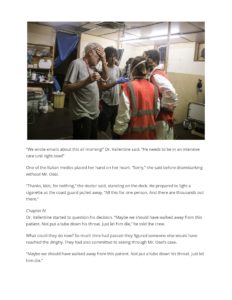 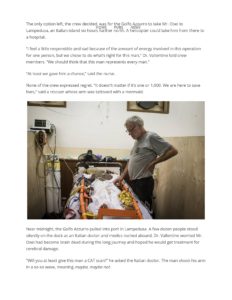 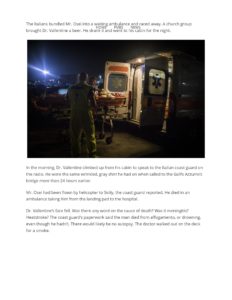 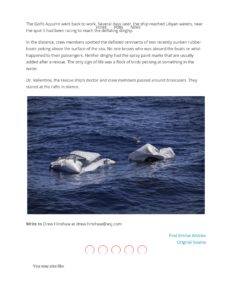 2.   MY LETTER TO THE EDITOR IN REPLY (NEVER PUBLISHED)

I am the eponymous Dr Vallentine referred to in your recent WSJ article and I am troubled by the inferences the article contains.

Firstly, when our search and rescue vessel departed the rescue zone we knew full well that we were not abandoning other refugees to drown at sea. I feel this is contrary to what you have implied in the article.

We did not choose one life over many. We would not have taken the decision we did had that been a possible outcome.

At the time, had there been drifting refugee rafts inshore of us, there was another rescue boat standing by at the SAR zone to take care of them. I say again, at no time did we elect to save one life over many.

Our dilemma in m/v Golfo Azzurro was quite different. We had a critically ill patient – intubated, mechanically ventilated but with little evidence of cerebral activity – who needed emergency transfer, assessment and treatment, even though his prospects were poor at best.

Our differential diagnoses – and when I say ours I mean mine and my nurse’s – were meningococcal meningitis and terminal heat stroke. Either way our patient needed immediate helicopter lift off and transfer.

Our initial frustration stemmed from the refusal of the Italians to airlift a patient who may have been infectious. For heavens sake! Had they not heard of face masks?

Drifting off the Libyan coast we waited far too long for news of their refusal to come through, while our ship’s hospital oxygen reserves dwindled to nothing.

Then we felt we had no choice but to try and get our patient – note our, not my patient – north to Lampedusa by sea.

Ultimately an Italian Coast Guard vessel arrived. Its medical and paramedical staff came aboard Golfo Azzurro fully garbed and masked against meningococcal disease. They had brought almost no oxygen, despite our repeated requests to MRC over the last 10 hours.

After much palaver they decided that to take our deeply unconscious ventilated patient he would need to be located exposed to the elements on the after deck of their RIB boat and not down below in the cabin. They said they had to protect their crew from infection.

We decided that he would be better off staying with us on Golfo rather than in the RIB. This was an unpleasant call, given the difference in our boat speeds (25 -v- 10 kts), but the correct one.

As I recall, this all took place more than 10 hours after we had given detailed medical information to MRC Rome about the clinical issues with which we were struggling, and asked for immediate help.

This poor patient was critically ill and had  very poor prospects, even in the best of tertiary medical centres. What was so distressing for us was our inability even to get him into the system.

My nurse Roberto Expósito was a tower of strength in the ship’s hospital and his tireless clinical input was second to none. This should be acknowledged.

The decision to sail up to Lampedusa, like all tactical decisions on Golfo Azzurro, was taken not by me but by our Proactiva head of mission. It was a professional, carefully considered and utterly proper decision. The commitment and focus with which the entire crew accepted the challenge was quite moving, I thought. A fine bunch of people.

One last point – despite what you say in the article, while I did lecture widely on the subject I have never been a professor of medical ethics.