The ancient Venetian port of Korcula calls itself the birthplace of Marco Polo, although Venice would strongly disagree. With more justification however, Korcula can claim to be the first place in the world to ban slavery, by official proclamation in the 13th century. Not a bad first, I would say.

After the long windless trip north from Montenegro and a side trip in to Dubrovnik, we had tied up at Korcula customs wharf (in the dark, as usual) to arrange clearance into Croatia. “We’ll see you tomorrow” the harbourmaster said over the phone. EU passport holder Maxine went strolling through the old town while her Australian slave was confined to the ship. 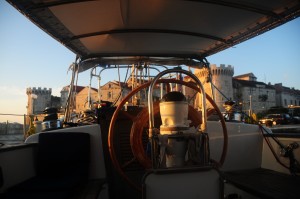 A soft dawn suffused the city walls with golden light and Tainui’s new topsides gleamed against this splendid backdrop. There is a marina on the other side of the peninsula but we were alone here, and I was glad of it.

Waiting for customs clearance Maxine resorted to her interminable iPhonery while I snapped pics. 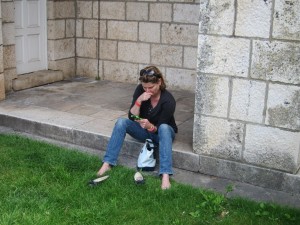 It is easy to be vague about plans in Croatia. There are so many islands, anchorages, historic sites and destinations that anything seems possible. There are only three problems. First, the weather. Warm and sunny, the Adriatic boasts less wind than most places I know. But there is a strong katabatic breeze known as the Bora, which can hit unexpectedly and with great force. Mainly a winter event, the Bora can spoil the best laid plans, although it is short-lived. In Trieste, gusts of up to 160 knots are recorded. Any other wind hereabouts tends to be light and from the north and northwest sectors, so that sailing north, as we are, involves a lot of motor sailing. 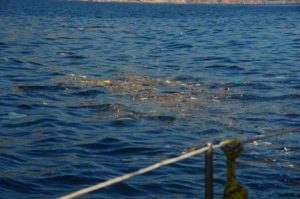 Second, I have never come across a bit of water with more flotsam and jetsam. Given the prevailing winds there can be no doubt that Italy is the source. It is quite a disgrace. The third problem is that the Dalmatian coast has attracted large numbers of yacht charter companies. There are Eurovision Song Contest yachts by the thousand. They are spacious, shiny, souless vessels, ideal for a fortnight’s partying. Generally they sail well in light airs. You can drive them backwards as easily as forwards so they slip in and out of tight marinas with ease. Getting Tainui to reverse into a marina berth, especially in a fresh cross breeze, is a haphazard and quite unpredicatable affair and it is only then that I envy these EVSC boats. Apart from Ron Glas we have not seen any cruising yachts and I miss them. 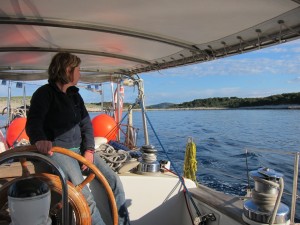 One good thing about the charter yachts is that they tend to congregate. For partying, comfort in numbers? I don’t know. Our next anchorage after Korcula was a deep, deserted bay with pristine shores. I could not believe our fortune in finding such solitude. Leaving for Split the next day we motored round the point and there, on the other side of the island, was a forest of masts in a much less appealing spot. And the sailing season here has not even started yet. 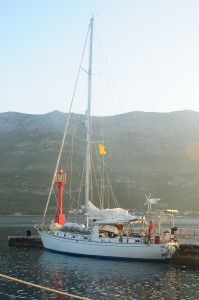 The coast is very pretty. High rocky shores and wooded islands everywhere. There are consolations.