We’re in Trogir, near Split. Maxine leaves tomorrow for 2 weeks’ family duty in Moscow. An unavoidable nuisance (the departure, not the woman). It has been a pleasure to have her back on board although she is not happy about the absence of wind. On this trip I have been pleased that she has not once mentioned Tainui’s lack of underfloor heating, a common complaint of hers in Norway and the Barents Sea. She works the boat very well and flakes the anchor chain without demur, but now however, it is our lack of an ice cube factory and a wine cooler which she carries on about. There is no pleasing some people!

Poor Tainui. People don’t realise that I take any criticism of this boat as a profound and corruscating personal attack. Cruising for Pasha and Tatiana was a new experience and they take all the discomforts as normal. But Maxine has been around and knows what might be, but isn’t. And being Dutch and a lawyer she doesn’t spare me these vicious attacks.

In fact things are working smoothly on board and those insurmountable problems in Piraeus have all been easily surmounted. Radar is radaring, the AIS transponder is great, but best of all is Mr Aries who, even though not yet called into action, now functions smoothly again. After his 40 years of faithful service that is a delight.

Coolant loss? Well, that is a work in progress. It is far less than before we found that leak in Kotor, and the remaining loss may well be accounted for by the radiator cap drain. I have bodgied up an overflow reservoir and will get a higher pressure cap (15 psi instead of the current 10). Then I will cross my fingers.

Now in Trogir, where marina fees are only $100 per day, I will take stock. Travelling north alone from here means only one change – anchoring technique. I cannot work the windlass on deck and flake chain in the forepeak at the same time, so I will change to rope and chain with the old 60 lb CQR. Then hauling in ground tackle can all be done on deck. I used this system in Cuba when the windlass brushes wore out. It is very easy for one, if not quite so reassuring when the bottom offers dodgy holding.

I spoke earlier about destinations and plans. For now, Venice is the object of this trip north in the Adriatic. I hope Maxine can come back for Tainui’s arrival there. Besides, I will need someone to steer the boat while I capture photos of Tainui sailing, off Piazza san Marco. I have long dreamed of this.

Now, the Romanesque and gothic towers of old Trogir call. 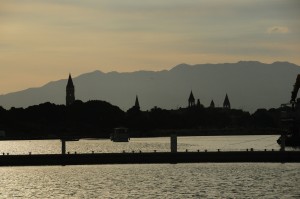