At 9 am we left Punta Vela for the run down to Santa Marta 130 miles west. After yesterday’s fresh easterlies we were expecting strong winds, but the breeze dwindled and Mr Ford was asked to help. By noon however, the wind was back and built steadily during the afternoon.

One of our online sources had described a series of north facing bays just before Santa Marta as Columbia’s fjordland. I fancied stopping in there en route, but we sailed so fast that we were off the entrance by 3 am. The wind had been backing and increasing during the night and we were down to a heavily reefed yankee (something I really don’t like) and despite a full moon we decided that it would be far too dangerous to try to enter across beam wind and sea, with no promise of an adequate lee inside. Moreover, our advice was 6 years old. 3 miles off the best of the inlets we decided reluctantly but wisely to give them a miss. I went to bed for an hour as we roared west to the corner, until Tainui was suddenly on our ear and Maxine was calling plaintively for help. The yankee was rolled in and we were able to run south to Santa Marta in uncomfortable seas, with bare poles and a little help from the engine.

Dawn saw us in the flat water of Santa Marta bay with winds still fresh but down to manageable strengths. We could see the marina entrance – the only one I’ve ever seen with a wind sock on the breakwater – but decided it would be too tricky to try it. So we anchored in the bay and collapsed. It being Easter Sunday we did not expect that customs and immigration would disturb us. They didn’t. Or at least we didn’t hear them above the noise of the wind in the rigging. Later, marina staff came out to the boat and assured us we could sit at anchor for 24 hours. The following day we got ourselves into a marina pen without damage, to my relief. 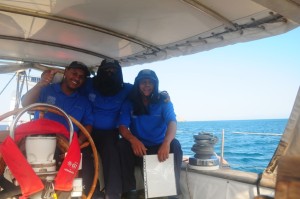 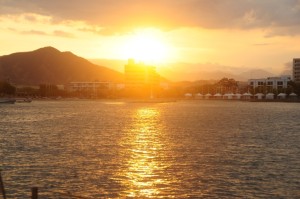 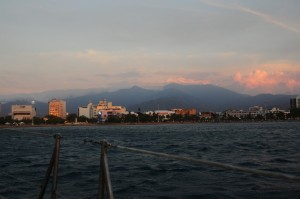 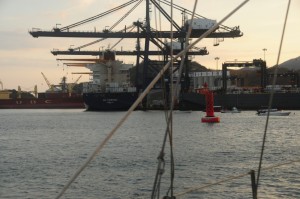