I have written before about great arrivals – Sydney, Rio, New York and Archangel’sk. Unquestionably, Venice must be added to this list. Tired and relieved to have finally arrived, we motored along Canal di San Marco past all the great icons of this beautiful city, wide-eyed, overwhelmed. Ships and boats of all sizes move purposely by in all directions, making it necessary for us to take care. Navigational rules of the road are not in evidence in Venice but nobody seems to hit anyone else. Vaporetti, elegant varnished water taxis, heavy little steel work boats and tourist ferries criss-cross with insouciance. To complete the picture, a huge cruise ship manoeuvres slowly through the throng. Maxine is an excited school child while Jasper, sitting in silence, is clearly overwhelmed. I am all those things. 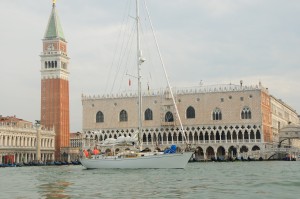 It is extremely hot and humid, with little breeze. Like Dirk Bogarde, I feel my makeup beginning to run. We could see the tourist throngs outside the Doge’s Palace and on the Rialto Bridge and felt privileged indeed to be out here in the stream in dear old Tainui. As we motored up and down the canal it became clear that our two pilot books are wrong about where and how to manage entry formalities. We searched in vain for the harbour-master’s office on the canal’s northern waterfront. It was not where it was supposed to be. With so much to see along the way we didn’t care much and we just dawdled along. But after 3 return journeys we began to wonder. A local coast guard vessel sent us in the direction of the cruise ship terminal, to no avail. A guardia maritima runaboat had no idea what we were asking for. We hailed a local police vessel, pointed at our Q flag, called “passport” and mimed stamps.

They sent us to Terminal San Basilio. Terminal San Basilio has a high concrete wharf with huge black rubber fenders. Just what newly painted yachts need. With incessant high wash from passing vessels I was more than a tad apprehensive about tying up there. Mercifully, on final approach we were waved away by men in orange flouro jackets.

Ever resourceful, Maxine had pre-booked a marina berth for us at Centosa Island. She telephoned the marina. They told us that being less than 50 tonnes displacement Tainui did not need to check into Italy by the usual processes. We should simply come to the marina and take a vaporetto to any police station tomorrow, to complete the paperwork. Tired by now, we were grateful for this news and headed to the island, an old military arsenal being converted. Our charts did not show the marina as anything other than a narrow blind channel with depths marked as 0.5 metres. I was apprehensive about entering but we were assured that the least depth was 3.5 metres. In we went and all went smoothly. Tainui is tied up in glassy water and we have finally arrived. What a gem of a place we have found.

3 thoughts on “Problems with makeup”