A fast sleigh ride out of Santa Marta took us across the murky Rio Magdalena outflow, west past Cartagena. Then the wind died and Mr Ford was called upon.

2 noteworthy events en route – first, the tobacco event. I had tucked my last cigarette behind my ear while I made a coffee. Feeling sticky I then did a quick head and neck douche. It was some minutes before soggy tobacco started to sag round my ear. Maxine, so typically malicious, burst out laughing. I wept.

Second, I hauled in a beautiful mahi mahi (dorado) off the Panamanian coast. We were so taken with the richness of its colouring – soft iridescent greens, yellows and turquoise – that we decided to forgo sashimi and let it live another day. I hope it was grateful.

Our landfalls are so often nocturnal and I don’t know why. Having sighted the misty, jungle-draped coast at sunset we were loath to go straight into Colon harbour, so we have anchored in Portobello Bay, 20 miles to the east. An easy approach in the dark.

Columbus discovered this secure harbour and it was from here that some 45 fleets of Spanish galleons, laden with treasure, set off on their journeys to Seville in the 16th-18th centuries. While the main export was silver, it is said that at one time, 30% of all the world’s gold passed through this little bay. You’d reckon that Cartagena would surely vie for the accolade. Francis Drake and Henry Morgan harried these ships. Indeed Drake died of dysentery here and his body lies in a lead coffin beneath Tainui’s keel as I write. Portobello Road is named after the bay.

The British captured and destroyed Portobello during the quaintly named War of Jenkins’ Ear. Rule Britannia was first sung publically during the victory celebrations in London. The Spanish quickly recovered the town however, and went on to defeat a huge and astonished British naval force in the Battle of Cartagena, but Portobello did not regain its status. 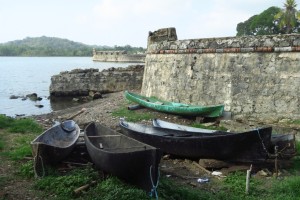 The ruins of Spanish fortifications are slowly being subsumed back into the jungle all around us. There are no marinas or bling boats, just a handful of cruising yachts and little fishing pirogues. Intermittent light showers with splashes of sunshine, the banshee wail of titi monkeys and forest colours of softest greens. It is lovely.

It is only 20 miles from here to Colon, where Tainui gets another well-earned rest.