For two days we hunkered down in Naoussa Harbour on Paros as the wind whistled through the rigging. The strong south-easterly weather was preceded by a spectacular band of electrical storms which caught us approaching the harbour. I had dropped our sails and, as usual, disconnected all our electronics. As the pyrotechnics approached I put the computer and a couple of GPS units into our steel oven. I don’t now whether this works but the Faraday cage effect is supposed to protect them from demolition in event of a lightning strike. After half an hour of ferocious squalls, sizzling electrics and heavy rain it was all over. But our radar no longer worked. I don’t think we were struck by lightning but we could have been. 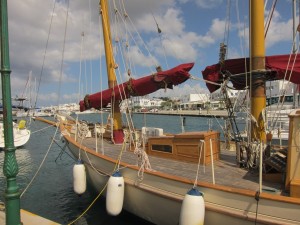 In sober mood we motored slowly into Naoussa Harbour and managed to tie up, once more without marking our topsides. With the inevitable beam wind I always go in bow first, unlike all the modern yachts which seem to drive equally well backwards as forwards.

A pretty little town, geared up for the annual influx of tourists which begins in a month or so. Nail manicure, United Colors of B, Hugo Boss – it’s all here. But once again we found ourselves grateful to be travelling so early in the season. 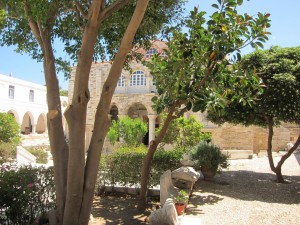 Across the island in Paroikia there is a beautiful 16th century church whose Greek name is variously translated as “church of 100 doors” and “church down the hill”. Legend has it that 99 doors are open but the 100th stays closed until Constantinople falls. I could only count 30 doors but the church is certainly down the hill. In any event, the Romanesque vaults and colonnaded gardens are a delight. 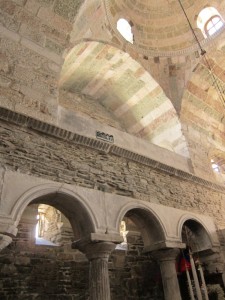