Tahiti is a very expensive place. At US$1,000 our provisioning bill for 4 weeks was twice as high as it has ever been before. Mind you, Carrefour is as good a supermarket as you could find anywhere – our fridge is full of camembert, brie and good wines. Melanie took charge of provisioning, of course. Jochen and I followed meekly and obediently. 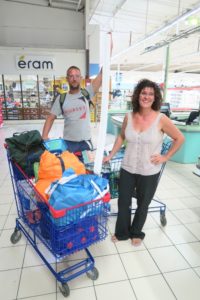 Melanie is an experienced sailor. She built her own boat in Paris, cruised the English Channel and has done many thousands of ocean miles as crew. In Tainui she was immediately at home. She cooks spendidly and hates engines. She and Jochen get on well and both are headed for New Caledonia, so Tainui is very well crewed indeed for the next bit. 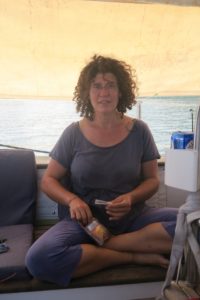 At Taina Marina, 5 miles south of Papeete, there is a good dive shop. Before Axel left we dived on 2 wrecks by the outer reef in stunningly clear water. Dimwit me left his GoPro behind, needless to say. All in all it was a relief to leave Papeete with its busy traffic and, from a boater’s viewpoint, access problems. The imposing mountains of Moorea lie just 12 miles west across the channel and it was a slow but easy beat north to the entrance pass to Opunohu Bay. Cook anchored here (not at the wrongly named Cooks Bay next door) after his transit of Venus exercise. We sat at anchor in relentless rain and squally winds, not attracted by the prospect of exploring the island in the wet. 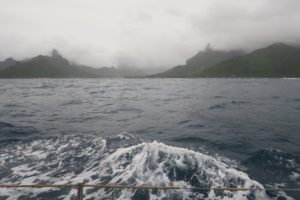 It is 90 miles from here to Raiatea, where we need to stop for mainsail batten replacement (those battens we had made in Ecuador had been sliced from a thin sheet of fibreglass panelling and just didn’t cut the mustard). It will be a tight fetch or a beat NW in the rain, but according to the GRIB files there is no letup in this weather for a week, so we may as well go. As for the legendary trade winds, I am told they do not really establish themselves hereabouts until June or July.