Light tail winds allowed us to sail SW from Fakarava in blissful silence.

Our little CPT autopilot has performed faultlessly, silent and drawing only 1.5 amps. The Aries servo wind vane cannot manage light following winds, especially when cross swells change the apparent wind direction so regularly. Thinking back, I realise that Mr Aries has not really had any use since that hard run south from the Canaries to Cabo Verde. It, and Tainui, have had to acclimatise to light airs, which mean slower passage times and regular fiddling with sail trim.

Our big light genoa and light staysail have been dragged out from bags in which they have laid dormant for years. Both of them 20 years old, they were only grudgingly cooperative. We tore the genoa for the third time and its repair in Papeete will be its final therapeutic experience.

After 24 hours Mr Ford was called into service once again and saw us to Tahiti, gulping the last of our 40W oil with unseemly avarice. But for all that, the engine runs smoothly and without complaint. We will stock up on oil in Tahiti and just press on.

Tahiti is mountainous and generates its own weather. Northerly squalls accompanied us through Papeete pass just after dawn and followed us 5 miles south in the well-marked channel inside the fringing reef to Marina Taina, where we will recoup. There are heaps of yachts anchored inside the reef, most of them still packed up for the cyclone season. Those which are inhabited have water makers and showers, unlike us. We douche on the jetty and are not shy about it. 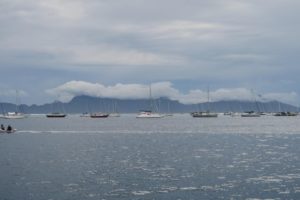 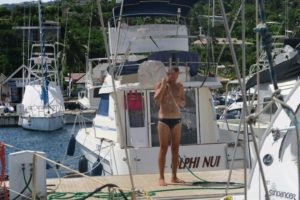 Sadly, Axel leaves us here to pursue his expansive, inchoate dreams, as any 19 year old should. Argentina, he thinks. He takes up a lot of space on the boat but we will miss him.