Readers will know that yesterday was annual Kerch Day. Despite wandering thunderstorms and intermittent rain there was a festive spirit in the town – tooting car horns, fun rides, concerts, WW2 re-enactments and streets full of strolling families. A suitable evening for Tainui’s  2013 Awards Night. It will come as a surprise to many, but Maxine scooped the pool at the awards ceremony, running away with the coveted Tainui Special Merit Award (not once but twice!), in the categories of both Overall Competence and Navigation Excluding Transit Leads. The restaurant erupted into applause at the presentation itself and madam pretended to be tearful, delighted and deeply moved. 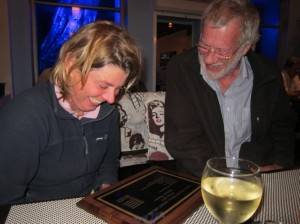 Fortuitously, a band appeared behind our table and dancing began. Then there were the Kerch Day fireworks as icing on the cake.

Maxine leaves for Moscow in 48 hours. Tainui will be a much bigger, lonelier and less efficient boat without her.