Last night Sasha turned up with a vast array of beers, home brew spirits, wines for Maxine and a sumptuous feast for 10. He brought with him a Russian orthodox priest with a long white beard, and a Georgian bloke. The priest stood in the cockpit and asked us all to be silent, then began a lengthy bass baritone blessing of Tainui and all who sail in her. I was very touched. Then the endless round of obligatory toasts began, each washed down with this spicy, unrecognisable spirit of Sasha’s.

We spoke in charade language and listened to music. As previously in Russia I found that Lonesome Valley, Taj Mahal and Ada Falcon did not impress. But when I put on Rachmaninoff’s Easter Vespers their eyes lit up and there was silence. I have found this instant recognition of Russian music everywhere we have stopped. 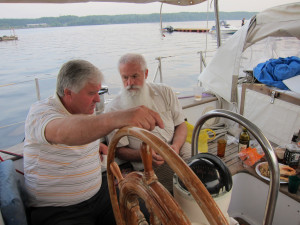 Things got merrier and again I felt my Cyrillic inarticulacy a barrier to deeper conversation. I sent an urgent SMS to Maxine at her hotel and she came down to the boat soon after to interpret. As is usual with her however, she entered immediately into  a long, animated and seemingly productive conversation with these blokes. In Russian of course (and yes Dirk, I know thar Cyrillic is the script, not the language, but I like the word), so that I remained none the wiser about what was being said.

I retreated into my cup and was soon in my cups. 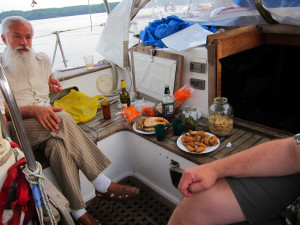 This morning Dirk graced the boat with his presence and Maxine is positively glowing. Tomorrow we leave for Rybinsky Reservoir and places beyond. I think we will have a merry time.

One thought on “Tainui is blessed”