The Volga follows a fairly narrow and serpiginous course from Nizhniy Novgorod with high forested shores. But today the scene has changed. We are now passing through a series of lakes and reservoirs with wide horizons and a layered landscape of rolling hills, fields, villages and woodlands. The channel across these lakes is narrow but well-marked. 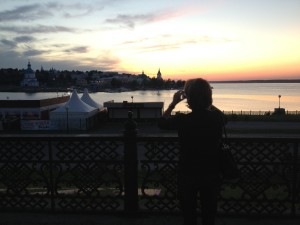 We arrived in Cheboksary in the early evening and tied up in the basin in the centre of town. At the little marina they said we were the first foreign vessel they had ever seen.  The town is new, having been rebuilt when old Cheboksary was flooded after the reservoir levels were raised by the locks about 5 miles ahead. The evening light was lovely.

Maxine had insisted we stop here because we had to replenish our wine stocks. Lieve is teetotal but easygoing. While I was happy to continue on relying on our vast vodka stocks, I have been known to take a glass of wine occasionally  and was pleased to see some Chilean chardonnay added to our drinks cupboard. In any case, you just don’t argue with Maxine. 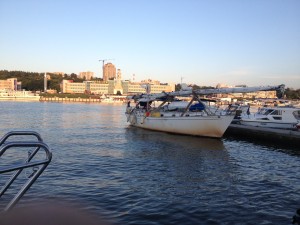 I was also keen to eat a Japanese meal and after reprovisioning we repaired to the waterside restaurant. There’s Japanese and Japanese – I will say no more. But a cheerful evening was indeed had, spiced with our increasingly sincere and garrulous toasts to one another. I even forgot the humiliation of my egregious navigation this morning.