Astute followers of our Yellowbrick track may have noticed some interesting movement of Tainui this morning.

I have been stressing to Lieve and Maxine the importance of fastidious recording of our position as we pass each numbered buoy. Overkill perhaps, I said, but you never know when you might suddenly need to know exactly where you are.

Well, we left last night’s anchorage after a refreshing swim. Calm, with clear skies. fortunately I was at the helm.

The Volga takes a sharp left hand turn off a moderate sized lake. About half a mile after that, beyond a low bluff, another river does a similar turn to the left. I was daydreaming, entranced by the light on the forest and missed the Volga turnoff. The channel was marked but became both narrow and shallow. Reeded sandbars were close on each side. The depth plummeted to 2.5 metres. I must be off line, I thought. It didn’t occur to me to check back on the chart. 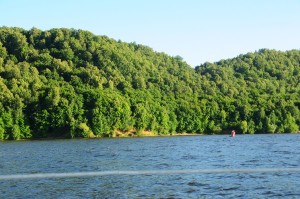 We entered the second, wrong river. When I noticed that the buoys were now laid in the opposite way – red cans to port and white nuns to starboard – the penny still didn’t drop. Only when it became obvious that the 5,000 ton freighters we have been passing hourly for the last month couldn’t possibly manage the tight turns in Wrong River did it dawn on me that I/we were in the wrong place. It came to nothing, in the circumstances. We backtracked and were soon on the Volga once again. But for one who has tended to pride himself on his navigation, what an embarrassment this was. More importantly, what if we had been approaching a dangerous shore in thick weather, tired and seasick, and a similar lapse had occurred? I shudder to think.

I suppose you need these sudden jolts back into reality from time to time. They serve to remind us of the narrow line between lazy travel and shipwreck. Your confidence steadily increases as you sail successfully. I think it was Hiscock who said that every yacht cruising the world will eventually wreck because of this dangerous hubris. My sailing life has been punctuated by such sudden reminders of my fallibility. I can remember each and every one of them and sometimes they visit me in my sleep. I get cautious for a while, then the cycle repeats itself.

Head bowed in humility, I apologised to Max and Lieve before pouring myself a beer.

2 thoughts on “The Wrong River”