We hadn’t intended to stop at Aruba, but a fast westerly trip from Curacao had us off the southern point at 11 pm and Maxine, Tainui’s fount of unassailable logic, asked why we shouldn’t anchor here for a snooze and do the 60 mile leg on to Los Monjes in daylight tomorrow, rested and fed.

So we crept into San Nicholas bay despite an unnerving absence of charted leading lights and buoys, dropped the hook and opened a bottle of Chilean sav blanc. The idea being that no Aruban need know of our existence.

Half an hour later the Coast Guard arrived. 4 friendly youngsters came aboard to check that we were not importing cocaine. Engine problems, we said guilessly. Satisfied, they said we could stay the night without clearing in, as long as we were off before 7 in the morning. But of course, we said. commenting on the absence of navigational aids they told us that the oil refinery having closed down there was no longer any need for them. 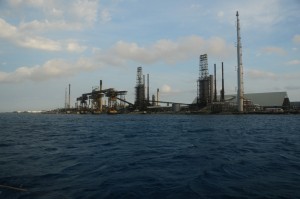 Now we’re slipping west at 10 knots under poled out headsails, threading our way through a veritable logjam of oil tankers anchored 6 miles off the coast. Venezuela is only 15 miles south and our destination a tiny group of Venezuelan islands called Monjes, is 45 miles ahead. There is a tenuous anchorage at Monjes del Sur, which has a coastguard station and is apparently welcoming of yachts in transit. From there is is 80 miles on to the Colombian coast.