I cannot believe it has been 36 years since I last sailed into Neiafu. I have disappointingly little recollection of the town, although the broad smiles, the laughter of schoolchildren, the warm welcome and the music are instantly recognisable. There are a dozen yachts here and the harbour is far from crowded. Apart from one big, ugly and empty hotel on the waterfront things have changed little. Tonga is the only surviving monarchy in the southern hemisphere and has never lost indigenous governance. After 2,000 years of solitude it was Schouten and Lemaire, followed by Cook, who started White Man’s non-violent invasion of Tonga. In the 19th century the ravages of missionary colonisation spared little here. The dreadful London Missionary Society, as always, spearheaded the spread of christianity and religion is probably more deeply entrenched here than anywhere else in the south Pacific. In the Tongan flag the red background is the blood of Christ, its white represents purity and the red cross Tonga’s deeply rooted christianity. In Tonga you are not supposed to swim without a shirt on, the whole kingdom virtually ceases to exist on Sundays and it is very poor form to utter criticism of the royal family. Any legal contracts signed on Sundays are null and void. 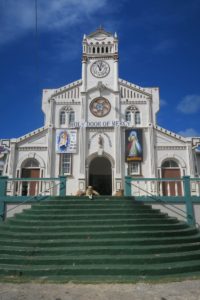 In 2008 Forbes Magazine voted Tonga the sixth most corrupt country in the world. The royal family is incredibly wealthy and owns nearly everything, while most Tongans live at subsistence level. Pro-democracy leaders have been imprisoned. But for all that, Tonga is peaceful and extremely beautiful. One thought on “Ah, Tonga”