In Vava’u, perfect 4 part harmonies raised the vault of the church and brought tears to my eyes. The congregation, dressed to the nines, waved rattan fans while children played between the pews. I wondered whether to forgive the London Missionary Society or to praise the ability of South Sea Islanders to convert its religious straitjacket into a thing of joy and wonder. Thinking of Gary Kildea’s splendid film (“Trobriand Cricket”) I chose the latter. 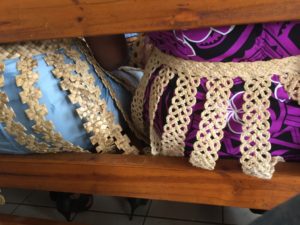 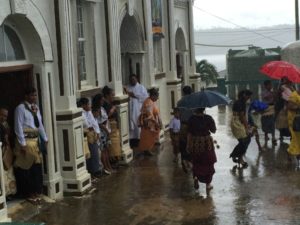 We anchored at Port Maurelle in preparation for the crossing to Tonga. As beautiful as ever, it was here 35 years ago that I met John and Anna Little in Kestrel and we have remained friends ever since. The weather report was dismal, with 3-5 knot tail winds for at least a week. After thousands of miles of fresh trade wind sailing however, it was time we had some tedium. 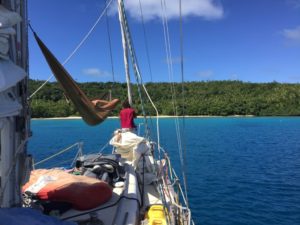 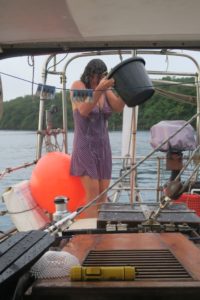 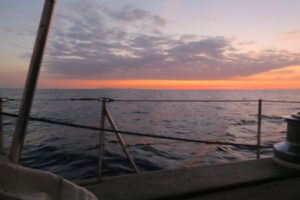 Sunrise over the Lau group We motored almost the entire way to Fiji. Our bibulous engine purred faultlessly and we had nothing to do other than feed it, swim, eat, take photos of sunsets, sleep and read. Mr Kindle saved my sanity as I romped through everything William Boyd and Edward Wilson ever wrote. We caught one small barracouda which, in a fit of trans-species generosity, I returned to the sea. Oh, and we saw a brown booby sitting imperious on a log.

Melanie’s playpen aft is an excellent spot in all respects except one – the engine noise in her cabin is insufferable. Short of sleep she has needed constant cossetting. Red wine and other things helped that process. Jochen cracked jokes and slept endless hours either forward or in his beloved hammock.

Now, we are anchored in Suva Harbour waiting for inward clearance. It is a glassy calm evening and we tipple Tang with spirituous supplement. Heroes of another successful ocean crossing. When we were in Fiji in 1980 in my first yacht Awatea, Janey wrote:

They reefed the main with a grin and sang:
“Some get their kicks from Yin and Yang,
but on Awatea it’s simpler, as we are
content with a cold gin and Tang”.

2 thoughts on “Yin and yang”