After a windy night at Caleta Damien we surged out into Estero Collingwood with bleak weather, staysail and poled out yankee, doing over 9 knots over the ground. In freshening winds we poked into Paso Victoria and after much struggle affixed poor Tainui to the shore at Caleta Victoria. As we approached this anchorage, fierce squalls roared down off Isla Hunter with smoking seas and much noise. Aligning the boat stern in and getting our lines ashore was an exasperating business, which took several attempts and a good hour’s cursing and shouting (mainly by me. David was sublimely patient). But finally we were safe, secure and ready for imbibulation.

It took us a good hour to extract ourselves the next day, retrieving our 4 lines from up in the trees and hauling in our 2 kelp-balled anchors while keeping the boat off the rocks in the vicious williwaws.

In Canal Smyth we found welcome patches of sunshine and the breeze eased – or at least steadied itself – away from the shore. I rushed for my camera as 3 tiny fishing boats, punching north, saluted as they passed. It was good to be going south. As our guidebook says,

“…the profile and the topography of the surrounding islands, most of them high in elevation, funnel the winds and can render N-bound navigation very difficult, if not altogether impossible, for a small yacht. Every leg must therefore be carefully planned.”

By 1500 the weather had become positively idyllic as we approached the impressive 1968 wreck of the 15,000 ton ss Santa Leonora. She is one of 5 recent wrecks in these immediate waters (the others are ss Moraleda, Magada, Ponte Verde and Recreo). 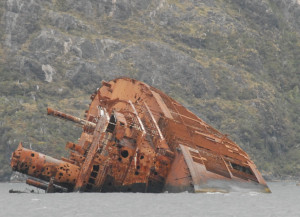 I believe Santa Leonora was on her maiden voyage and it is said the helmsman on the bridge misheard the pilot’s order “alright, helmsman” as “right, helmsman” and turned to starboard. The results are spectacular, even after all these years.

At 1745 we entered Caleta Teoteka, perhaps the snuggest and most secure anchorage in the whole of Patagonia. The picture tells it all. Faraway joined us soon after. 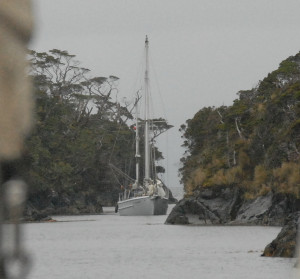