It was time to exit the labyrinth of canales we have been threading since we departed Puerto Montt a hundred years ago.

There was nothing clement about the weather as we left Teoteka. I didn’t want to set out this morning because like my mood the weather was very bleak, but I relented because David was so keen to get moving. Last night he said cruising was always a compromise between crew. He is right of course, and I know I really should keep my curmudgeonliness supressed. I said I’d made all the compromises for him I intended making. I retired to bed with Proust and could’ve stayed in that anchorage with Swann for days. But this morning I did compromise, as I should, and here we are. Dave knows how generous it was of me and he is being solicitous. I know how generous I was too, and marvel at myself.

Trouble is you can’t see anything in weather like this. There’s nothing to do except make hot soup, hang on and marvel at the endurance, skill and courage of those who came here before us, with their shitty boats and no polartec, no goretex, no radar, no GPS. No wonder there are shipwrecks everywhere.

Dinah and John left a couple of hours before us and are down there in the murk somewhere ahead. They’re a good deal slower than we are but they left 2 hours earlier. Every time I call “Faraway” on the radio, Fairway lighthouse responds. The lighthousekeeper doesn’t understand that I’m not calling him. He sounds such a nice chap – probably about 11 years old as everyone in the Armada is these days. I have to pretend I called him to report our position. I’ve checked in 5 times now.

Dinah has promised us Christmas dinner at the next anchorage, if we’re there together.

into Straits of Magellan

Leaving Canal Smyth, our windward mark out into the Straits of Magellan was Isla Tamar. The Pacific swells came as a surprise after all those weeks of flat (albeit choppy and breezy) waterway. We had strong squally winds, short lumpy seas and poor visibility for a miserable beat out to the island, which was only a radar smudge until we were almost upon it. Then, with making tide, we freed off, poled out the storm staysail, put the kettle on and surfed into the straits at 11 knots. 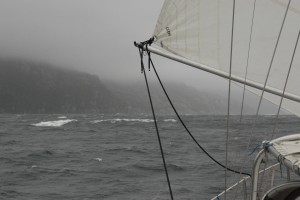 25 miles down channel we had lost the swells and jagged cliffs on the northern shore were intermittently visible through the mist. Cold, inhospitable and thoroughly dangerous they looked, too. Fierce-looking williwaws smoked out of the gullies but dissipated before reaching us. We tucked into shelter at Caleta Parda Chica and waited a couple of days for the gale to blow itself out.