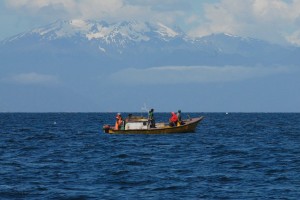 Hector clambered aboard uninvited at a most inopportune time. but we will never forget his leathery features and his exuberant conversation. He offered a bag of tiny, sour apples in exchange for vino, wiskie, birre. We gave him 500 pesos and he left. A misty Sunday, with soft showers. Rural smells and sounds. Church bells.

Motoring again, out past Puerto Quelin and north to Isla Apiao. Nothing to see but the absence of things to see. Then land ahead, and around the point we find the tiny entrance to the Apiao anchorage. Against a 4 knot ebb we crawled in gingerly-ly. The current swirled as depths dropped to 2.5m in the narrowest of fairways between high rocky shores, with fishing boats stranded dry well above us. A strange feeling. Engine failure would have been much more worrying than touching bottom.

A noisy night of chain grumbles. We wandered to and fro on the turn of the tide and then sheered in and out of the flood stream. To my amazement 2 fishing boats felt their way in after dark – I am glad to have left an anchor light burning on the stern.

Today we upped anchor at 1330 against 4 knots of making tide – another of our astonishingly early starts! Sunny with a cool, light SW breeze. Debate about our destination – Mechuque group are tempting but time is of an increasing essence. If we forego the M group and speed north (under power – the breeze has dropped), we’ll get a good early arrival into P Montt tomorrow but wherever we stop tonight – and there wouldn’t be many alternatives, we’d get to in the dark. Unless we get a big lift from the ebb. Again, an earlier start would have left us with much more choice.

The Mechuques won. And a good thing too, as it turns out. Lovely calm channels between tiny wooded islets. The late afternoon sun has a particular softness today. We bypassed an English Swan 48 at anchor in one of the recommended spots and snuck into the lagoon rightly described as spectacular in the RCC Guide. Dropped the hook in 9m sand. Pink snowy mountains to the east across the treetops, 3 beautiful fishing boats rafted together inshore of us.