At 0830 we upped anchor, through reams of diaphenous green weed. It is fresh, crisp and cold, with uncharacteristically harsh light. I didn’t know there was sun at this end of the day. Puerto Montt tonight, where we will de-commission Tainui for the winter and travel north to visit our stalwart Patagonia Net friends Wolfgang and Gaby at their farm near Valdivia. Then Chris flies home to avoid the thing she hates most about cruising – hauling out. Tainui is coming out of the water in Puerto Montt to enjoy a well-earned rest for the winter, while we pay belated respects to the mortgage. She will be in good hands – dear Mani Suanto, a genial Finnish live-aboard whose name appears in so many of the Patagonian cruising publications, will be keeping an eye on her. 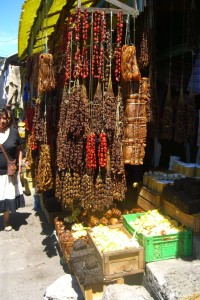