Piriapolis is packed with obese holidaymakers. To the noise of muffler-free motor bikes is added advertising by boom boxes on the roofs of cars. At top volume. If I were mayor of this town…

Here it is pretty hot but with little humidity. Crowded with obese, unselfconscious Uruguayans dragging deckchairs and overtired children. All clutching their mate jug blanquetos seguritas. Dave says it is more like Bognor Regis than Blackpool, either way, a good place to get out of. Fresh winds die after sunset and the late evenings are just lovely. It is just wonderful to get back to Tainui. She is in very good shape, dry and well-aired. Everything worked first off, even the satellite phone, though only after I had left a message at the butcher´s shop did I remember the international dateline, so Chris is probably still either in Darwin or being searched for in some massive air-sea operation.

We have another 5 days´ work before departure. We have the usual endless list of small, essential jobs, in addition to antifouling, propellor servicing, forestay replacement and provisioning – you know the sort of thing. I hope we can put the boat back in the water on Wednesday and depart the next morning. 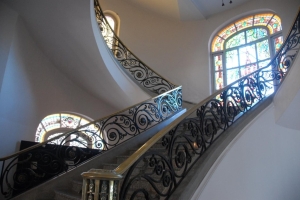 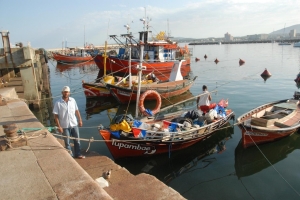 We´re missing the wrap-stop – a vital piece of jib furler which I hope we can pick up in Punta del Este, 100 miles along the coast. It has to come from BA and a friendly yacht is bringing it down in the annual BA-Punta race next week. So there´ll be another stopover before we get round the corner and into the Atlantic.

Dave is relaxed and in good spirits. Which is good, because there is no end of traipsing to be done in hot streets, looking for bits and pieces. Chris would just hate this bit, not to mention living in a propped-up Tainui with non-functioning toilet.

Dear Tainui is in surprisingly good form. The batteries are well topped up and there is no mould. I feel pleased finally to be on the brink of going. A very ordinary meal in town, light, interrupted sleep, aches and pains. Quite strong and gusty easterly.