It is 2 pm and we’re about 60 miles off Cape Bojador on the coast of Western Sahara. You wouldn’t know it though – there’s no red dust and the sea is deepest lazuli blue. We could be in the middle of the Tasman. We have had a quite uncomfortable night – with no wind, a big northerly swell and at least two irritating cross seas have had us lurching and rolling all over the place. I feel personally responsible and want to apologise to Ian and Max for the weather and the sea state.

We had roared out of Las Palmas at about 4 pm and ran fast down the east coast of Gran Canaria under double reefed main. Even under bare poles we were doing 5 knots. On our chosen course the following seas were too much for Mr Aries and we gybed spectacularly a couple of times before firing up the engine to power the autopilot. I am really looking forward to installing our new CPT autopilot in Cabo Verde – it only draws an amp or two and can drive us on a magnetic course all night without ravaging the batteries.

By nightfall the hard northerly had dropped, leaving behind really miserable seas. You could only hang on and curse as we rolled and crashed all over the place.

This morning the northerly has filled in again and we are now loping along under staysail and poled out yankee. We’re still rolling but not enough to prevent Ian from throwing together steak sandwiches for lunch.

Last night I think Maxine decided she would never go ocean sailing again – I know I did – but today Ian’s meal with a cervesa or 3 has us glowing benignly. We’re doing 7.5 knots in the right direction and the decks are dry. 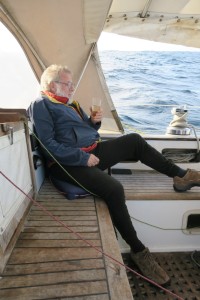 Things could be worse.