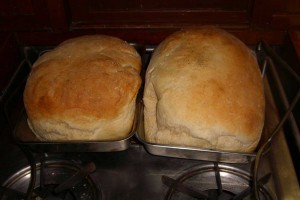 By dint of circumstance my last 2 loaves were a success – light and well-risen. Dave on the other hand, had produced an inedible cinder block (my crew mate Dave – what a brick, but what a brick!). Anyway, since we departed NZ I have acquired something of a reputation among the 2 of us as a Master Pastrycook. Not well-earned, I can assure you, but after 3 weeks at sea there is inevitably a reshuffling of realities, priorities, truths.

We get on very well at sea, Dave and I. Bread baking aside, there is only one other point at which there is potential for conflict. And that is the music of Wagner. Like Wotan, I have negotiated a treaty. The deal is this – I’ll bake the bread if Dave promises in return to allow me unfettered access to both to the iPod and the stereo volume control during the process. So far, it is working. It works partly because Dave doesn’t get seasick – regardless of the weather, on baking day he can retreat to the pointed end of the boat. We’ve been hard on the wind for most of the last 2 weeks and with all that crashing and banging in the forepeak, I suspect that my Wagner is hardly noticeable. Anyway, he puts his deaf ear upwards and sleeps till the Rhine finally overflows its banks.