How sad to farewell this remarkable man. Larger than life, he was filled with enormous energy, enthusiasm, practical skills and an irrepressible sense of fun. Why is it that people like him shuffle off, not the Abbotts, Duttons, Morrisons? I will leave it to others to sing his well-earned public praises, but I must pen a few words of my own.

Bon vivant, superb sailor and a loyal, generous-spirited friend, Bik launched our book “Sailing Through Russia” at RANSA. We first met at Lord Howe Island in 1979. Single-handers both of us, he in Maris with The Pig (his dinghy) and I in Awatea. Bik convinced me to sail in company with him across to NZ – my first trans-Tasman – since which time our paths have crossed often.

Ian had a cast iron liver. He and Martin Farrand drank me under many tables but next morning they were always up at dawn to catch the tide. I could never keep up with either of them.

Know to all as Bik, Ian may have cleaned up the world but he littered the oceans with his adventures and their anecdotes. With him around there was never a dull moment. In Auckland he arranged for us to meet at a boutique restaurant of his – Claudeneons. “There’s a big sign” he said, “…you can’t miss it”. I could miss it and I did, until finally I looke up and saw the huge factory sign which read “Claude Neon”. Under it was the seediest little cafe you could ever imagine. A typically memorable Kiernan evening that one, it ended up with fat cream cakes which he thrust into our faces.

Bik’s commitment to his mates was absolute. I am sure there are thousands of them around the world, all grieving. He leaves behind warm wonderful Judy, the most splendid, patient and long-suffering of partners. Judy knew she came second to Maris, but her nest in Kirribilli was warm and always welcoming. I cannot imagine her loss. 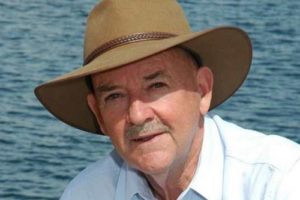