Looking back at Azov as we motored down river I was sad to be saying goodbye to all those wonderful ships.

The short stretch of the Don below Azov is just as beautiful as the waterway above it. 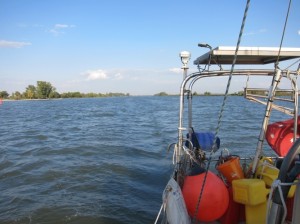 Needless to say, we cracked a bottle of chardonnay at the river mouth and solemnly saluted the last buoy. There is a long and very narrow dredged channel extending 20 miles from there, out to sea. It is well- buoyed but not wider than 30 metres and at times less. The depths are 1 metre or less on each side. Ships pass only with difficulty. 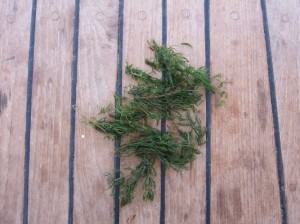 It was in mid channel that our salt water inlet suddenly became blocked with weed. I pulled off to one side to clear the inlet pipes but we were kissing the bottom the moment we left the channel. Back in the channel we dropped anchor to get the coolant flowing again.

After I had dismantled the pipes Maxine announced that a large bulk carrier was approaching though the gloom of the dusk. She called it up to warn we were NUC (not under control) while down below I scrambled to clear the mess and remantle the hoses. Somehow we got the engine sorted and the anchor up within about 4 minutes, leaving just enough time to move to the side of the channel to allow the oncoming ship to pass.

By now we were seriously tired and we dropped anchor for the night about 20 miles offshore. Nearby a veritable city of ships sat at anchor, waiting to enter the Don. Never was sleep so welcome.

4 thoughts on “Sea of Azov”