Crossing the southern approach to the Strait of Messina the moon was setting over Sicily. I had seen the huge lump of Mt Etna at dusk and the lights of Riposto were clear on the coast ahead. Now,at 2 am, an uncomfortable beam sea with no wind made for irritating motion, but despite the nighmarish absence of tobacco I was in a good mood. 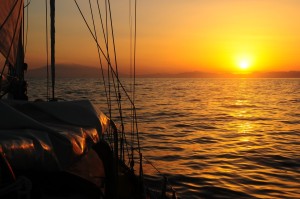 As the sky darkened tonight I noticed a bright orange apparition in the sky to the west – a large vertical gash which flared and waned regularly. It took my tired brain a while to realise that this was lava flow from the volcano. As we approached the coast I started hearing rumblings which I thought were a distant storm. Mesmerised by the lava flow, it took me a while to realise that the noise and light were in synchrony.

I had seen volcanoes at work before in Iceland and in Vanuatu, but this was quite spectacular. I couldn’t take my eyes off it. I couldn’t get any photographs because of the ship’s motion.  Anyway, here I am in the little harbour in Riposto, sipping a 2 am ale and marvelling at this volcanic jiggery-pokey going on in the sky above. After 40 hours of only meagre catnaps, I will sleep well tonight.