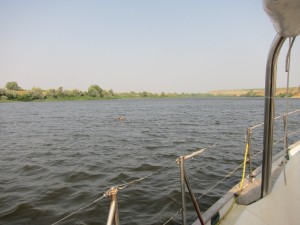 Our anchorage at Galka was free of march flies and mosquitoes. When we got in at midnight last night we rejoiced. But this morning Tainui was besieged by buzzing bees. Utterly harmless of course, but Little Miss Perfect immediately launched into her Tourette Syndrome routine. Not surprisingly the bees were offended by this, and after her swim this morning they took revenge. Maxine was stung on the foot. Her response was impressively theatrical. Medical confidentiality would prevent me showing any photos of the lesion, even if it were visible, but I can show you the assailant, which poor little thing paid with its life for a single, brave and understandable act. …and what about the chart?

I will not mention Maxine’s minor argument with her bloody Mary.

It is 200 miles down the Volgadonskoye Reservoir from Saratov to Volgograd. The river is between 1 and 10 miles wide but the north-south fetch of open water is great, with uninterrupted sea horizons from the cockpit looking either way. The channel follows the western shore, which offers few inlets for refuge while to the east there are vast, impenetrable shoals. Depths vary from 8 to 20 metres and the southerly current runs at around half a knot.

Sailors will appreciate that this is not the sort of place in which to be trying to travel against the wind. With a rising wind the sea conditions can rapidly become unmanageable, if not downright dangerous. Under sail, running downwind with the current in these conditions would have been pure delight. But in a boat like Tainui I doubt that anyone in his right mind would contemplate travelling in the opposite direction, either under sail or power.

We had been warned not to leave Saratov yesterday because of forecast 20-25 knot northerly breezes gusting to 35 knots, but I decided that it would be better to roll uncomfortably but fast downwind rather than risk any future possibility of south in the breeze. So off we set. And it has not been unpleasant at all. Rolling, treeless hills to the west remind me of Eden-Monaro. The channel is deep and it follows the shore closely. We are often only 15 metres offshore beside high sedimentary cliffs. To the east there are vast shoals but no sign of land. The commercial traffic is steady and at one point we were passed close by 5 southbound vessels, aligned bow to stern. Timber, oil, cement and grain seem to be the main cargoes. In balmy weather and softening breeze we pressed on till midnight when we crept into secure anchorage at Galka Inlet under GPS. I quite like night passages on these reservoirs although Saratov locals have warned us against travelling after dark. Tainui is of course a dry ship, but some of the commercial ships are not. Apparently the flow of vodka on their bridge decks can make their courses and speeds erratic. So far we have only seen exemplary IALA ship handling.

3 thoughts on “Maxine is stung by a bee”