After breakfast pancakes Miss Perfect and I went for a swim. I was already out of the water when the lads pointed out a crocodile approaching from the shore. A big fellow – perhaps 3 metres long. We shouted to Maxine who initially thought we were cracking a not very funny joke. But eventually she carved a deep furrow in the lake. I’ve never seen her swim so fast. The crocodile was still 75 metres away when she flopped onto the deck.

Unlike Maxine, our line handlers thought it was all very amusing. These Gatun crocodiles don’t usually attack humans, although there was a fatal attack in 1994. I didn’t relish the thought of dealing with a traumatic amputation on board, but I suppose we would have managed. But as an amputee, Maxine would have complained bitterly, I know.

Unfortunately I don’t have any pictures of this splendid event. 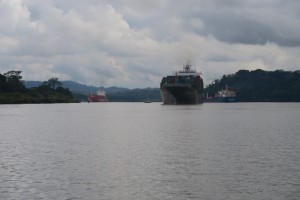 3 thoughts on “Maxine and the crocodile”