Bora Bora, so-called jewel of French Polynesia, has been grey and miserable. But warm, at least. And seen through the mist, it is a pretty spectacular island, I must say. 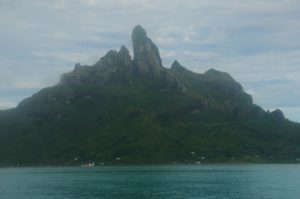 After sampling various anchorages and having done some scuba diving we picked up a mooring off the legendary Blood Mary’s restaurant for a bit of a splurge. In 30 knot squalls and with dazzling lighting displays however, we decided to stay aboard. With computers tucked into the oven and the cockpit side curtains down we made our own special drinks (and cigarettes) and sat in the cockpit as snug as bugs in a rug. A supremely satisfactory drug den. The rain came down harder than a tall cow pissing on a flat rock, as they say.

Tonight we’re glad not to be at sea.