…me and Tainui both.

With much difficulty, Lucy has managed to convince me that the Bloody Mary, combined with poached eggs on toast, is a perfectly respectable breakfast. Even in this most abstemious of vessels. I have embraced the idea and, I must say, she is right. She usually is. 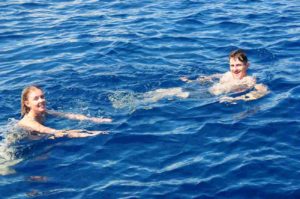 Intermittent rain and headwinds have been the norm during this trip south from Pula. Still, we’ve managed. Last night we tucked into a gorgeous little bay and, out of nowhere, there arose a calm, warm and cloudless evening. Just ideal for swims and various considerations of personal hygeine. Even a punk haircut for Dan. 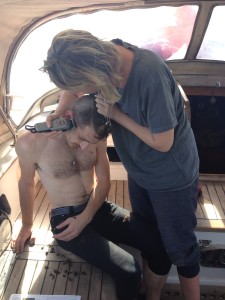 Navigation has not been terribly difficult along the Dalmatian coast, though sorting out islands with names like Zut, Zit and Sit (pron “Shit”) can be taxing after a Lucy breakfast. There has even been enough time left over for me to tell The Bunda Joke (Maxine’s favorite), in its original unexpurgated form.

Lucy, whose capacity for hyperbole is unlimited, frightened us with her annoucement that we had an urgent need to replenish our liquor supplies. “There’s nothing left”, she said with real panic in her voice. This is the woman who swears black and blue that it took us eight days to cross the North Sea, when in fact it took us less than three. Disbelieving, I went below to take stock. She wasn’t quite right – we still have 1 bottle of red wine, 1 bottle of vodka, 1 bottle of rum, 1/2 bottle of limoncello (thanks, Maxine), 2 bottles of whisky and 4 litres of beer. Not quite panic time, but I agreed with her (always politick) that we need a stop to re-provision. Things are getting a bit tight. We aren’t.

I have been told that July and August are peak periods for EVSC charter boats, but we have had no trouble avoiding them. Little bays and inlets abound along the Dalmatian coast. You have to choose according to expected weather, but that’s all. We still need to form a plan. As in life, really. For the moment, the pheromonals seem happy but daily runs of 40 miles are as much as we can usefully manage given the headwinds. I would like to get across from Albania to Sicily while the pheromonal youngsters are aboard, but at this rate we will barely make Albania before they leave for family reunions in Crete. Then Tania arrives, with real children (5 and 7 years old!). That will be an interesting novelty in Tainui, whose children have been Gerda and Dima, Rosie and Beth, now Lucy and Dan. All of them in their late 20’s.