After a long, interesting day on the lake and in the locks, we entered the Pacific Ocean just at dusk. Heavy rain and increasing wind against current made for a lumpy sea as we attempted to pick up a mooring off Balboa Yacht Club.

Repeatedly I brought Tainui up to the mooring but the plunging bows meant that Maxine and the lads couldn’t get a line to the mooring buoy, even with the assistance of the club tender. On the sixth attempt we suddenly lost steerage way. Gearbox failure or a lost prop, I thought. A big catamaran lay immediately to leeward and our situation was immediately critical. I got an anchor over but we were too close to the catamaran for it to take up in time. We drifted onto the boat, beam on. We were quite unable to fend off and we hit her starboard bow just ahead of our port beam. Then we were past and our anchor took, about 100 metres behind her. All this happened in a 25 knot breeze with zero visibility, lumpy seas and driving rain under the eerie spotlight of the pilot boat, which was standing by.

After the pilot and line handlers took their leave, we sat down to take stock. The problem – a broken flexible coupling between propshaft and gearbox – was immediately apparent. Mercifully, our gorgeously painted topsides have remained pristine. The toerail capping took the impact and its timber is fractured in a couple of places, although that won’t delay travel plans. I have a spare Vetus flexible coupling on board, lacking only the rubbers. I can order a set, but repairs will take a few days at least.

I haven’t been over to the catamaran yet, but I am hoping a direct blow to her bows will not have caused major damage. I have already apologised to the owner. 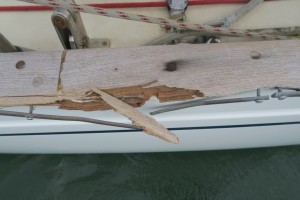 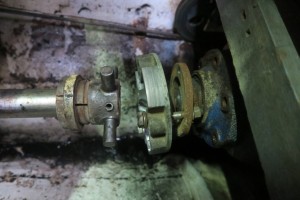 BYC moorings – all calm next morning 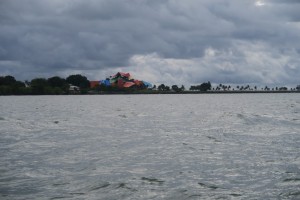 2 thoughts on “Bad end to a good day”