I’ve been sitting staring at a blank Sailmail screen for the last 20′, waiting for the muse. I don’t want to write pretentious, travelogue or air-headed. I’m trying to think of things to say to Chris to make her feel less distant, to miss me. But I’ve got no more tricks up my sleeve.

Dave is crashing and banging around as he does in the mornings, chatting endlessly. I wish he’d sit quietly and read or something. I’m reminded of Chris’ perennial complaints about the space I take up in her life sometimes. I have given Dave some jobs to do because he’s like a fish out of water until he has a project. Ah yes – that split oar needs araldite, clamping and whipping, Dave. In the mornings why am I so sour, such a curmudgeon? I am glad I am not on the receiving end of myself! Outside, Rousseau’s forest is still, sodden, dripping. Steamer ducks, a sea lion and 2 dolphins mess round in glassy waters between the Mogotes. Not at work because it’s Sunday.

Here in the cabin it is bright and warm. The diesel stove is friendly. Rain patters on the deck. There’s no damp, no mold. It doesn’t smell. Neither do I. Just so you know.

Yesterday we motored 30 miles up a long windy fjord to see a glacier named after a pope (Pio X1, who was apparently an able and enthusiastic mountaineer). Big as buggery it was – 3 km across and 100 m high. The biggest is Patagonia and getting bigger, they say. Mariolina says that its calving behaviour in autumn is spectacular in the extreme. For us however, the glacier was silent and imperious. Certainly nonetheless overwhelming for that. 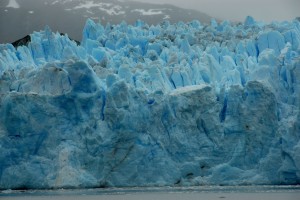 the extraordinary colours of glacial ice

There was strong current flowing from the glacier south down Seno Eyre. We decided to take advantage of this and had a fast sail back out into Canal Wide, dodging bergy bits along the way, and down to Estero Ringdove, where we tucked in behind Isla Rosa for the night.

The geography has changed since Canal Costa and San Rafael. By the day it is getting bigger, more majestic. And the sense of remoteness is palpable. Slab-sided mountains draped with waterfalls. Snow, steep shorelines. Dark, narrow, brooding canales. Yes, it is getting colder. A bit colder, but not seriously so. Seriously. I’m not wearing gloves and I haven’t yet got out my thermal strides.