At sunset a Salvamente Maritimo (Spanish Coast Guard) helicopter had located a refugee boat with some 50 persons on board. We were just 15 minutes away from them and offered to attend. Even without details of the condition of the refugees Sal Mar told us our presence was not necessary because they had a rescue vessel only an hour away.

Later, in the dark, we carried out a grid search for a body reported by a passing commercial vessel. In vain. Setting off at dusk to locate the deceased

12 hours later, off Cartagena this morning, we sighted 2 more refugee boats. A small dinghy and a larger one. In 10 minutes we were alongside the first of these – an 11’ boat with 12 persons on board. They were Algerians I think. Waving frantically, they were obviously overjoyed to see us. They had been at sea for 4 days and nights. Now, out of fuel, they were paddling uselessly. This little dinghy had freeboard of only about 10” and its occupants were fortunate indeed to have had calm weather. We reported our find to Salvamente Maritimo and again were ordered to stand off. They radioed that one of their vessels would be despatched to pick up both groups. We stood by until they arrived 35’ later and retrieved the refugees. 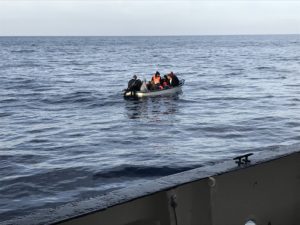 They’re so glad to see us 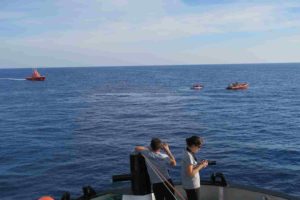 Late the same afternoon we received a report of another vessel adrift. Armed with its approximate GPS position we sent out our RIB boats to search, but found nothing. By dark it was cold and blowing hard from the north. Later, as we crashed our way north into uncomfortable and confused seas towards Barcelona, my heart went out to anyone stuck in one of these vulnerable little boats. 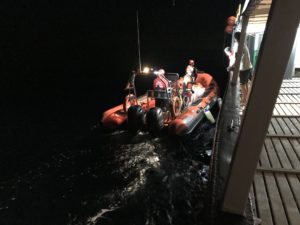 …and back, without finding the deceased

The following day and tied up snugly in Barcelona, we heard that the vessel had been found. There were some 50 people on board and 2 of them, both children, were dead. 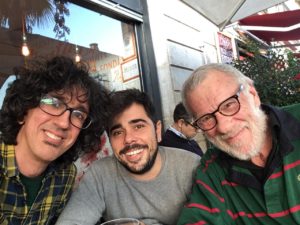 Sal Mar is clearly possessive about search and rescue operations in Spanish waters. I think they and the EU more generally would like Open Arms and other NGO boats to simply piss off. I don’t know why.

(2 days later) Last night it blew hard here in Barcelona. We hear that 17 persons were found dead off Motril. No details.