We hauled the anchor in the Paramaribo River after the top of the tide. The 6 mile channel out to sea from the river mouth passes through invisible shoals. The markers are about a mile apart – so different from the splendid navigational aids into Cayenne. There is a 2 knot westerly set across the route and we steered up 30 degrees to maintain our course, zig-zagging to keep in the deepest water. 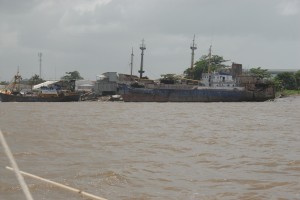 On the way in we had noticed that even the local fishing boats are constantly hunting for deep water in this way. I don’t know how the shipping gets in – I presume they just plough through the soft mud. The channel is not dredged and the shipping must be the means by which it is kept open.

Our chart marks 22 wrecks in the vicinity. Not surprising. The shoals extend 10-15 miles offshore, Amazon silt dumped by the strong Brazil current and augmented by the local river discharge.

Rules – use the tides. Don’t try it if there is swell running, or if the breeze is fresh. Don’t take your eyes off the depth sounder, as the channel is at times only about 15 metres wide (remember, this is 6 miles offshore in opaque brown water). You can only marvel at the old navigators and sailors, who did this regularly without Brookes and Gatehouse, without GPS and without Henry Ford.

With a 20 knot headwind the seas are steep and short. At half tide springs the shallowest depths was 3.8 metres. 7 miles out we finally came to the Suriname Abyss, where depths plummet to a dizzying 6 metres. At the fairway buoy we turn left and take off.

2 hours later, astern at the prostate rail I delight in being back at sea. Out of sight of land, we surge along at 8 knots in deep water – well, 15 metres worth! No flying fish yet. They wisely stay out in the blue water, which is 100 miles offfshore. I can imagine fish navigation classes in which small fry are warned against going too far inshore, because of the shoals and currents. Do they love flying? Or do they groan as we approach, take a deep breath and just go for it? Interestingly, they fly in schools and sometimes change direction in the air in unison, like flocks of birds.

Spirits are high. Dave gave me the finger (of rum with Cayennese OJ). We are only 3 days from Trinidad.

Sitting in the pulpit watching the dolphins, we passed a lazy whale shark. As we plunged along at 8 knots, I felt a renewed sense of the enormous privilege it is just to be here, doing this. Seeing this. Remarkable that from time to time it can become just .. sailing. These are the first dolphins we have seen for 700 miles and there was an immediate sense of oneness between us. Well, anyway..

The wildlife deserves comment. Along this coast we are inspected often by curious terns, whose calls come as a surprise when you think you are all alone at night. There are magnificent frigate birds off the estuaries, but in nothing like the numbers we saw on the southern Brasilian coast. The only pelagic birds I have seen are scattered petrels – a small black variety with a patch of white on the tail and a weak arrow on the dorsal wings. They have fast, erratic flight just above the water. I suppose they are gadflys of some sort. And one gannet, and that’s all.

Later. Tainui is doing herself proud. The wake sparkles under a fat pumpkin moon as we rush along in a 20 knot beam breeze. All-consuming beauty. It is a very familiar sight but I had forgotten the magic. I always forget. I wish I could retain a stronger and more physical memory.

I still keep checking the barometer and wondering when the next front or low will sweep across us, but nothing ever happens. This wonderful breeze just keeps on keeping on. While the vegetable stew brews to Act 1 of Cosi, a rum punch has us glowing.