We continued our meandering course south via Paso Aguirre, Canal Occasion and Canal O’Brien in grey, windy conditions. These are hallowed waters for those who’ve read Darwin and FitzRoy. Isla Basket probably hasn’t changed much since Murray paddled back to the Beagle in his mud and lath coracle, although the Yaghan are extinct.

Round the south-western end of Tierra del Fuego and into the Beagle Channel, we stopped at those beautiful, remote anchorages – Caleta Emilita, Caleta Beaulieu (Seno Pia este), Caleta Olla and Caleta Eugenio. We were pretty much alone, seeing perhaps 1 fishing boat in the distance every 3 days or so.

Now when I say we anchored at Caleta Eugenio I certainly thought that was where we were. But the next morning we found “Faraway” on VHF and they insisted that that was where they were. I went back to our charts and found that we were in an identical bay about 400 m further east. A look at the charts goes some way to explaining the error. On the subject of errors let me say that there is much improvement needed in GPS plots in these waters. Time and time again radar told us we were in the right spot when our GPS had us sitting on a mountain 2 miles away.

In the Beagle Channel, Ushuaia (Argentina) is the hub for shipping, air traffic, repairs and crew changes. Puerto Williams (Chile) is on the south side of the channel 25 miles further east, and is a tiny village in comparison. Pto Williams has one big advantage however, and that is that it is a snug all weather spot. You tie up to an old steamship the Micalvi, which the navy ran aground in a little creek to form the southernmost yacht club in the world. Ushiaia, on the other hand, is an open bay and ferocious northerlies sweep down from the mountains and make rafting at the jetty a nightmare.

But to clear out of Chile you bypass Ushuaia and travel east, 25 miles downwind and down tide to Puerto Williams. Then, when the paperwork is complete, you have to slog all the way back again, to clear into Argentina. This is a tedious but unavoidable business.

On New Year’s Day we tied up in Puerto Williams next to Traversay 3, an American yacht we had last met in NZ some years ago. 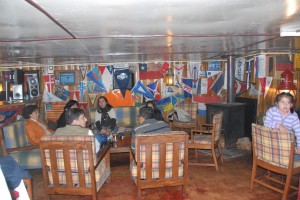 Puerto Williams boasts the southermost yacht club in the world. The Chilean Armada ran an old steamer aground in the creek here, and its tilted saloon has become the meeting point for crews of all the visiting yachts. Sitting by the fire with a beer at MV Micalvi you will meet expeditioners setting off to climb in Antarctica, National Geographic camera teams going south to film in the Weddell Sea, glaciologists, ornithologists and single handers of every kind. The saloon walls are draped with icons, flags and photos. This part of our long journey was over. More than a few drinks by the fire in the ss Micalvi saloon were well-earned. Our RANSA burgee was appended to the wall of the saloon along with those of many other, braver yachts. 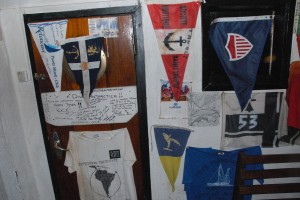 Back at Ushuaia Dave departed Tainui at 0500, bound Buenos Aires. By bus! I am of course sorry to see him go. We have done so very many miles together in this boat. When it comes to decision-making we have reached the stage where not much needs to be said. Things just happen. Watches change without bells, without calls. Meals are cooked without much discussion. Broken things are prioritized and repaired without issue. We tend only to argue about trivia.

Now I have to prepare the boat for Chris’s arrival for a 3 week cruise, and then for Ian’s return, along with my two gorgeous daughters. Ian hasn’t graced our cockpit since the subantarctic islands in 2006 and it will be good to have him aboard again with the girls.  And Chris? – well what can I say?