At 0300 on Monday our log reads “Ipanema beach abeam 3 miles” and the lights of the favela sprawl up into the hills behind. Jesus looked benignly down at us through the mist as we sidle past Copacabana and into Rio harbour. A splendid experience. With the help of radar we found Marinha de Gloria, tied up at the welcoming dock at 0500 and slept. And slept.

By 0830 we had decided that Rio was hot and too big, overwhelmingly so. We totted up our miles still to be run and got anxious. The sun was upon us, the mozzies into us and harbour porridge all round us (they say 40% of all Rio’s faeces enters the harbour untreated). So we decided to up and leave. Just like that. World’s shortest visit to world’s most beautiful city.

Destination Buzios. Another long hot day, with nowhere to stop for a dip apart from Cabo Frio, whose waters are just that.

Now, 9 hours later, we are still 12 miles from Cabo Frio, crawling along at 5 kts with strong adverse current and a fragile little southerly breeze, along what must be the world’s longest beach. They don’t do oceans this flat where we come from.

Dreams of lomo or camaraones at Buzios evaporate as the sun creeps under the awning and I retreat below. Dave’s mixing us the first (well, second) of the afternoon’s bowel preps (petrol and mango juice). Outside it’s warm but not hot – probably because there is fog around we think because of the “resurgence”. Dave complains it is cold. I say it is probably only his cancer coming back. Dolphins, terns, boobies and grubby trawlers work the chill waters west of the Cape and a monarch butterfly is swept on board from the sea – could it really have crossed the Atlantic, or is the Pacific their only ocean?

Dave’s recipe book “100 ways to serve ketchup” yields up a splendid omlette and we sit. And sit.

Rounding Cabo Frio was a relief. The lights of fishing boats close in under the cliffs looked like the candles in The English Patient. Turning left at the headland we suddenly found 1 kt of favourable current and sped north between the radar smudges of unlit islands to Buzios, where we anchored gratefully at midnight and collapsed. A cool calm night. Intriguing bronze statue on the waterfront 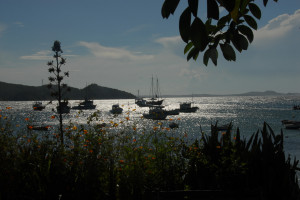