After dark we groped our way through a maze of navigation lights into the city. Ever resourceful, Maxine called up a passing fishing boat, turned on her usual charm routine and asked for advice about places to stop for the night. The skipper slowed down, told us to follow him, which we did, into a creek and a peaceful little small vessel marina in the centre of town. Parkland and a million stars. Floodlit onion domes standing above the trees. Deep sleep.

We are all 3 of us captivated by this lovely town, which was founded by the Volga Vikings in around 1014. It is the first of a series of beautiful riverside cities and towns on what is called the Golden Ring – a broad sweep of the Volga around Moscow.

As usual, Tainui is an object of discreet curiosity for passersby. The tangle of standing and running rigging draped inelegantly from her mast cannot be tidied and her topsides are grubby, to say the least. Russell was right when he refused to paint her before we left Australia. “What would be the point” he asked “when I’d have to do it all over again when you get back”.

Mind you, I had no idea then that Tainui would be doing quite so many miles and over such a long time. I’ll have to bite the bullet and get the topsides sprayed at next winter layup, probably in Izmir in Turkey at the end of the year. In the meantime, I am reassured by the words of those Newfoundland fishermen who, when I apologised for her ill-kempt appearance, said “ar, doan you worry bout that sur, she be a working boat”.

As for Yaroslavl, pictures speak louder than words and a few images follow: 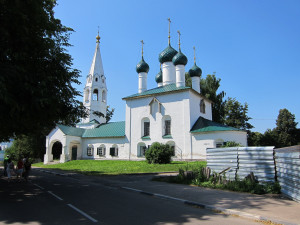