Tourism and Venice go hand in hand. With a shrinking resident population (currently 56,000) Venice receives more than 22 million tourists annually. Locals here say that the parlous future of this city is defined by tourism rather than global warming and rising sea levels. 5 minutes in Piazza San Marco leaves you with no doubt about that. I had thought that it would be impossible for us to get off the beaten track here. Spurred on by Maxine however, I decided to give it a try.

Water taxi drivers and gondoliers had told us that the canals of Venice are off limits to private boats without special licences. But we did some research and found that this rule only applies for vessels with engines in excess of 9.9 hp.

Our 8’6″ Walker Bay dinghy, with its elderly 3.5 hp 2 stroke, is no greyhound. You don’t roar along you just potter, and there is no need for whiplash insurance. With some anxiety we decided to spend a day exploring the canals of Venice. And what a day it was.

There are 170 canals criss-crossing the city. Tourists take vaporetti, water taxis or gondolas along the major tourist routes – the Grand Canal and perhaps half a dozen other canals. That left the rest for us to explore in solitude. Well not quite alone, but in company with workboats, barges, the odd ambulance, an occasional police boat and not much else.

In a trance we motored aimlessly for hours, past hanging geranium pots, laden clotheslines, old women sitting at upstairs windows and children playing on watery stoops. Mossy steps led to mysterious doorways. The canal walls, draped with emerald seaweeds, were punctuated with rusted mooring rings and rotting piles. Impossibly narrow pathways led off to god knows where. Three storeys above us the masonry facades seemed to close over our heads. 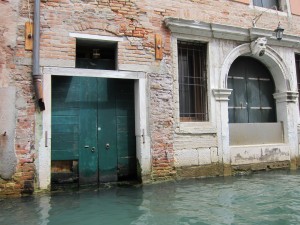 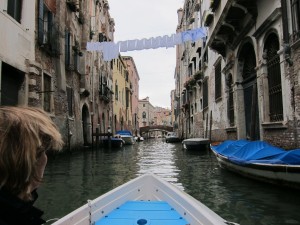 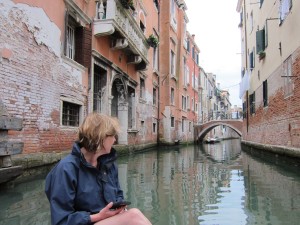 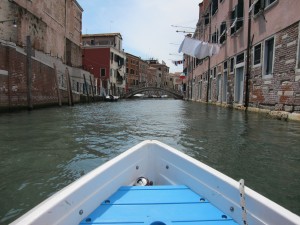 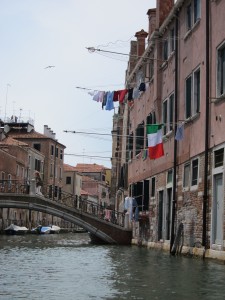 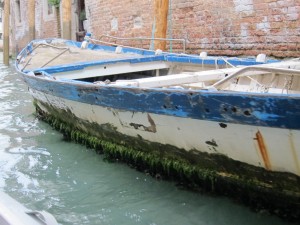 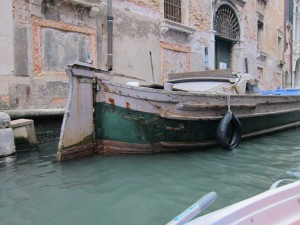 Beside a small cafe a bargeman offered us a mooring spot in front of his boat while we quaffed spritz and devoured anchovy pizza. Much fortified, we decided we were ready to take on the Grand Canal. Alcohol stimulates bravery.

The Grand Canal is Venice’s version of the M1 motorway. It is busy, there are traffic jams and the wake from a thousand passing boats is significant. You cross it with trepidation. So off we pottered, eyes in the back of our heads, feeling very small and unstylish. But it soon became apparent that other boats were keeping an eye on us, slowing down to minimise wash, waiting patiently for our erratic navigational intentions to declare themselves. We got used to it and began to enjoy ourselves, but it was a relief to turn off into another of our private little waterways. 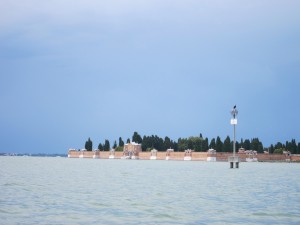 On the way home, huge storm clouds loomed to the north. In the broad sound between the military base and Cemetery Island the rains came and we were soon drenched. It is only half a mile back to the marina at Centosa Island but in open waters the ferries and taxis turn on the speed. We did’t ship too much water but I was grateful for the dinghy’s inflatable skirt. What a good investment that has been.

For yachts visiting Venice, I cannot recommend this sort of excursion highly enough. A most memorable day.