It is with great sadness that I announce the passing of dear old Mike. He died peacefully last Sunday after a long struggle with metastatic carcinoma of the colon. He fought his illness with characteristic humor, anger, obstreperousness, persistence and courage – just as he fought strong headwinds and big seas. Mike was a boatbuilder and he loved wooden boats, sailing and the sea. I met him at Billings Yard in Stonington, when I was admiring a lovely metre boat which he had just done up. I drank rum and he drank Laphroaig, one thing led to another and he ended up sailing with Tainui from Baddeck to Labrador and across the North Atlantic to Scotland. He was a wonderful hand – strong, tireless, intuitive and experienced. He was hard-working, articulate and well-read. Our bad weather round Kap Farvel would have been so much worse without him.

An expatriate Taffy, Mike brought with him to America his pugnacity and strongly held socialist views. He argued with other crew eloquently and at length in support of his case. In the cockpit I often had to intervene to prevent bloodshed. One debate which sticks clearly in my mind was whether Dick Cheney is a war criminal or a True American Patriot. No prizes for guessing Mike’s (and my) side. He was a formidable debater, our Mike, and I admired him his passion and moral rectitude. 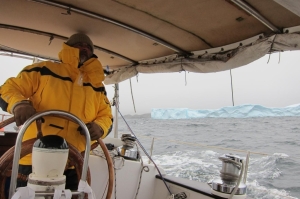 The world is full of ratbags at the moment (Australia’s federal politicians, for example) and it seems so unfair that Mike has shuffled off and left them behind. He was a bloody good bloke and he will be sorely missed.  He is survived by his lovely wife (Luvvie), his son (Gareth) and a gorgeous Starling Burgess double ender (Barnswallow).