The Marquesas islands lie to the north of the cyclone belt. April signals the end of the cyclone season but this being an El Nino year our departure in late March was considered early and we were ahead of the cruising fleet waiting there.

It is a 900 mile downwind run SW from the Marquesas to Tahiti. Stretched across this track lie the Tuamotus, a complex archipelago of coral atolls. These low, palm-fringed islands do not appear on the horizon until you are very close in. Once feared because of this, the unpredictable currents around them and the sometimes hair-raising passes though their fringing reefs into the lagoons, the advent of GPS means that they are now standard cruising fare.

Our 550 mile run down to Kauehi was relaxed and uneventful save for a torn light genoa. Apart from one lonely dive boat Kauehi Atoll was ours to savor alone – the warm, persistent easterly winds, smooth turquoise waters, palm forests, coral and fish of unimaginable variety provide ample reward for the ocean passage (pics to follow). You could get very lazy indeed in these waters. 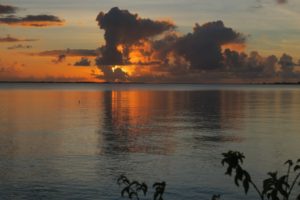 My spirits have lifted at last. As they should.