Sailing the coast of Sicily last year I was reminded of the death of Percy Bysshe Shelley, which is a classic example of such behaviour. Author Lynn Shepherd describes the circumstances in “History in an Hour”. She has kindly allowed me to reproduce an extract here.

“On July 1st Shelley took his boat, the Don Juan, down the coast to Livorno, with Edward Williams aboard. The boat had had additional top-masts and sails fitted to make it faster, so that Shelley could out-pace Byron’s new boat, the Bolivar, when they raced each other in the Bay of Spezia. It’s not entirely clear whether Shelley was aware how dangerous this modification was, and how unstable the Don Juan might prove to be, especially when fully rigged.

A week later, on July 8th, Shelley made preparations to sail back to Lerici, planning to take with him both Williams and an 18-year-old boat-boy called Charles Vivian. There were warnings of bad weather, but despite the fact that Shelley had no particular need to travel that day, he insisted on setting sail. The next time the boat was sighted was several hours later, in the midst of the storm, toiling in heavy seas and carrying a reckless amount of sail in such high winds. The captain of another boat risked the safety of his own crew to go alongside and offer to take Shelley and his companions on board, but Shelley refused, and when the man called to them that they must take in sail or perish, Shelley seized Williams’ arm to prevent him, crying “No!”

It was ten days before the bodies were found, and by then Shelley was identifiable only by the clothes he wore, and the book of Keats’ poems he had in his pocket. His face and hands had been completely eaten away.” The bodies were buried in the sand where they were found, near Viareggio, to satisfy Italian quarantine regulations. 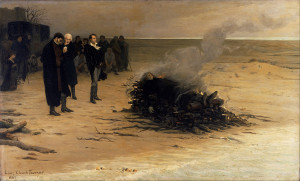 A month later, on August 16th, Shelley’s body was dug up again – one shudders to think the state it must have been in by then – and burned on a pyre on the beach, in the presence of Lord Byron and Shelley’s friends Edward Trelawney and Leigh Hunt. It seems Shelley’s heart refused to burn, and Trelawney fished it from the ashes and gave it to Hunt. Later, and after a rather unseemly struggle, he surrendered it to Mary, who kept it, wrapped in silk in her writing case, until the end of her days. Shelley’s ashes were finally laid to rest in Rome, where his headstone bears the inscription:

Nothing of him that doth fade, But doth suffer a sea-change Into something rich and strange.

When is it simple ignorance, when an excess of hubris? Or are they just are reflections of the same thing? The answer may be obvious in Shelley’s case, but so often it is not.