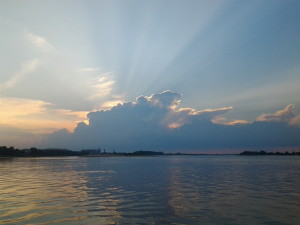 Thunderheads loomed over us when, in fading light, we crept into a likely looking inlet for the night. Black night was upon us when we realised that the second set of channel markers was missing and the charted depth of 5 m was wrong. Drawing 2.2 m, Tainui had at times only 12″ under her keel. We zigzagged along chasing the channel by depth sounder. I was reminded of our worrying approaches both to the Cayenne and Paramaribo Rivers in another life, where the channel is kept open by churning propellers of fishing boats (and us).

This morning Maxine swam gracefully in the tannin coloured waters while Dirk and I cleansed our palates with a brew. I was shamed eventually into a dip but Dirk, for whom hygeine has an idiosyncratic definition, read Private Eye in the cockpit.  Our trip back out this morning was simple – depths did not drop below 6 m on the opposite side of the inlet, where our charts showed 1 m shoal. Nature rewrites cartography again.

An hour down the Volga we had severe overheating of the engine. There was no observable external coolant loss, the salt water circulation was normal and oil level and colour were normal. An hour’s enforced idleness in the channel and 7 litres of coolant later, we set off again. This time, at only 1,200 rpm and with the radiator cap loose. I have decided to replace the capillary tube stack in the heat exchanger when we get to Nizhny Novgorod, even though it has pressure tested normal on several occasions.

Now we are motoring gently across a wide lake. There is a huge thunderstorm behind us but we are brave and determined. The engine temperature is normal and the spires of Gorodets stand above the horizon ahead in remarkable mirage. Dirk has asked that any argument about fata morgana and other atmospheric phenomena be left until dinner this evening.