In one 2 day period last month 7,000 people were rescued off the Libyan coast. The commonest countries of origin at the moment are Guinea, Nigeria, Cote d’Ivoire, Bangladesh, Syria and Gambia, in that order. That refugees from Bangladesh would travel half way round the world to Libya to start their sea journeys beggars belief. It is thought that many of these folk may have originally travelled to Libya looking for work and are now seeking refuge from brutal employers and from slave markets and prisons masquerading as detention centres. 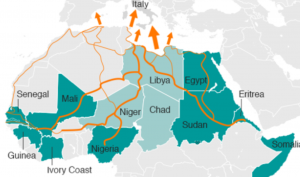 Smuggling is a profitable business. According to a recent EU task force report (AAP), revenue flowing to Libyan coastal cities from people smuggling exceeds A$460,000 per annum.

We have heard reports today of gun fighting between the Libyan Coast Guard and people smugglers, which may explain the lack of refugees on the water even after the weather has settled. Our mission coordinator says there has been no intermission like this in years.

Perhaps the rise of the NLA and its conquest of Benghazi make have made the Coast Guard anxious too. And to confuse matters further, the EU is apparently committing funds to Libya to help block escapes by sea to Italy. One of our crew has suggested that the people smugglers are frightened of the Australian doctor on board Golfo A!

Next month there might be some fun. A loony alt-right group called Identitarian has just purchased an offshore research vessel with the intention of deploying it hereabouts. The identitarians allege that the NGO refugee rescue boats are working in cahoots with the people smugglers to encourage refugee travel to Europe. They say they intend to retrieve boat people at sea and, with the help of the Libyan Coast Guard, return them to African shores. This ploy will sound familiar to Australians. Watch this space.