Tainui’s 250 mile passage from Cefalu north to Sardinia was noteworthy for 2 reasons. First, she had a fresh tailwind. Incredible, I know,  but true! For the first time since the Sea of Marmara the spinnaker pole went up and it didn’t know what had hit it, poor thing. I do talk about age a bit, and my decision to pole out the yankee rather than set the spinnaker itself was another example of that ageing process in action. Still we had a lovely, rolling 8-9 knot slide which just ate up the downhill miles.

Despite cloudless skies, a haze concealed the mountains of Sardinia until we were just 5 miles off. Again, the wonders of radar and GPS.

These waters are busy and I have been relying on my radar alarm, which alerts me when any target enters my preset 6 mile cocoon, and the Vesper AIS transponder which clangs loudly when any AIS-enabled vessel is going to approach closer than my chosen 4 mile preset. I know it is not entirely prudent to sail alone in crowded waters but these two systems allow me to catnap for 60 minutes at a time. It is surprising how you get used to that interrupted sleeping, although at anchor in Carbonara Bay I fell into the sleep of the dead.

The second memorable element on this passage was the presence of two dozen large dolphins, who surfed under the bows for hours on end. At times, they were swimming 6 or 8 abreast, in perfect synchrony. What a delight!

From Carbonara I crossed Caglairi Gulf to the west, along the south coast of Sardinia. A freshening headwind made progress more and more difficult and by late afternoon I willingly gave up, pulled in behind Pula Head and anchored in flat water. 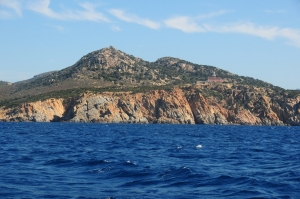 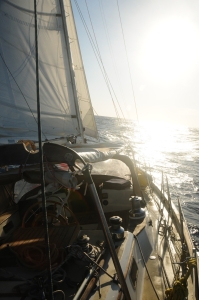 Southern Sardinia is slowly sinking into the sea. The pre-Roman city of Nora occupied Pula Head and it gained fame and prestige as a Carthaginian and later Roman trading port. Most archaeological excavation remains to be done, because the ruins are either on military land or under water. Indeed the pilot book warns against anchoring on the town’s old foundations. It is hot and very humid – every morning the decks are sodden and I am finding it all very enervating.

Still, in the Balearics Maxine arrives for the last leg down to Gibraltar. I am looking forward to seeing her again – she will not tolerate any of my maudlin self-indulgence.