Another windless 24 hours with lurching cross seas and slatting sails. It is very frustrating – not good for the sails or the soul. We spent the morning siphoning diesel into the tanks from our extra jerrycans. We have about 500 miles of motoring ability now, with 1,100 miles to go. We do need some wind, if Ian is to get to Lucy’s wedding in Sydney. There is Sargassum everywhere. 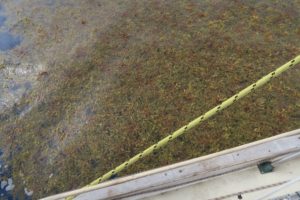 We also dragged out an old but little-used Elvstrom genoa – larger and lighter than the heavy yankee, which is in need of some re-stitching after the last couple of months’ battering. The Elvstrom genoa is a bit long in the luff, but serviceable.

Golly these headsails of ours are heavy to handle. Maxine is right – it’s too much work for elderly short-handed sailors. With difficulty we got it done, but we marvelled at that bloke doing the single-handed Route du Rhum in a 130′ trimaran – his headsails each need 5 people to lift them. I read that each batten in his mainsail weighs 20 kg!

Today our visitors have been limited to two lovely white-tailed tropic birds and school after school of skittering flying fish. No dolphins. Young loggerhead turtles are said to take refuge in the sargasso weed hereabouts but we have seen none. Neither have we sighted the other inhabitants of the Sargasso Sea – eels. Apparently elvers swim here both from Europe and from USA to mature, before returning to their homelands. The things some people do!