After her beery farewell at Rostov’s Library Restaurant (much recommended), Jen has flown off to Jordan for her next adventure. How sad to see her go. Back on board Tainui we have done nothing but sleep, read and eat. I am surprised by how tired the last few days have made us. 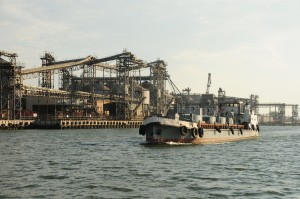 Avral Boat Club is small (9 yachts and the usual power boats) but welcoming and well-serviced. And it has the added advantage of being located by the big ship anchorage to the west of the city. I watch in awe as 7,000 ton ships creep in and anchor fore-and-aft just 50 metres apart. They are such good skippers, these blokes. 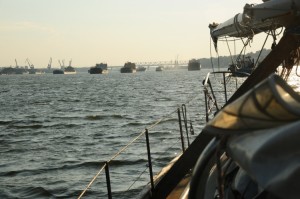 Lieve’s friend Zinaida (yes, Lieve again!) and her daughter Anna took us out for a wonderful lunch on Rostov’s left bank at grand, faux Spanish restaurant. She had sent a car to pick us up and would not allow me even to share in the cost of the occasion. Such is Russian hospitality. Now Rosie is ensconced in the aft cabin with her newly recovered computer and an enormous hard drive packed with movies. She had left her computer in Moscow and Lieve (Lieve, again!) had DHL’d it down to Zinaida here in Rostov. Maxine is networking, wheeling and dealing in the forward cabin while in the cockpit I watch the endless parade of ships creep past.

In contrast to Zinaida’s hospitality, two events stand out in my mind. Both of them typically Russian, Maxine says. First, we were phoned by someone from Rostov TV who requested a television interview. We said yes, as we always do. But when the interviewer told us that we would have to pay 1,000 euros for the privilege, we declined only slightly politely. Second, the port officer told us we would have to pay 2,000 roubles (A$75) to help with his relocation expenses for his new posting in Siberia. We thought it politic not to refuse that one.